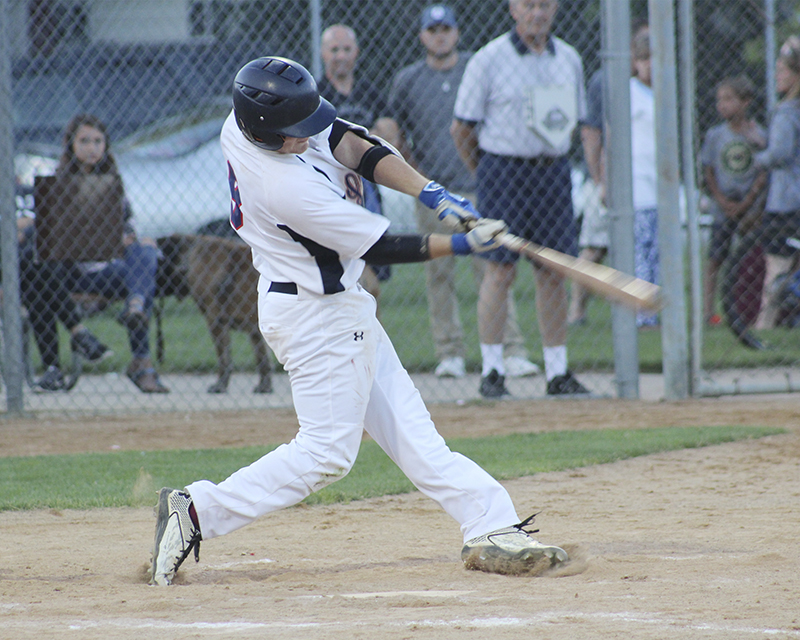 Infielder Hunter Waning lead the Lakers in hitting over the season. His bating average was .300 on 93 plate apperances. Waning scored 13 times himself, while batting in nine runners over the course of the season. - Tyler Julson/Albert Lea Tribune.

The Lakers baseball team finished its inaugural season in Albert Lea at home Friday night. The team went 11-19 in the regular season and finished in fifth place in the Pioneer League.

During the last week of May, around 20 players from all over the U.S. gathered in Albert Lea to begin training for the first season of Lakers baseball. Players came together in their off season to continue working and developing their game while away from their college teams. 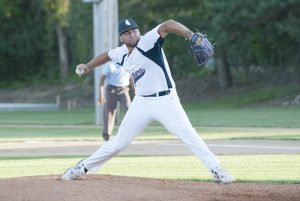 Blake Bagenstos finished the regular season with a record of 2-2 with the Lakers in 2017. He recorded a 3.69 ERA, faced 145 batters, allowed 13 runs and struck out 26 batters. – Tyler Julson/Albert Lea Tribune.

Despite the losing record, head coach Sam Schumacher thought the first season was a success.

“It’s all about development and getting better,” Schumacher said. “The guys grinded all season. The best part of the season was watching these guys grow on and off the field. I’m extremely proud of this group of guys. I’m excited to follow them this coming year and track their success during the college season.”

Through their first two weeks of play, the Lakers went back and forth with winning and losing games. It wasn’t until the third week of play that the team found a bit of a groove and put together a small winning streak.

After its first winning streak, Albert Lea had a couple of tough skids, losing a series of games. During the week of July 3-8, the Lakers lost four consecutive games, followed by another four-game skid the week of July 15-20.

At Hayek Field, the Lakers finished 6-7 overall and on the road they finished 5-12. Although the team finished with a losing record, it was competitive in nearly all of its games. Most losses were by just one or two runs.

The largest win came when Albert Lea took down league leaders Storm Lake on July 22. The Lakers had a huge six-run sixth inning to beat the Whitecaps 12-4. 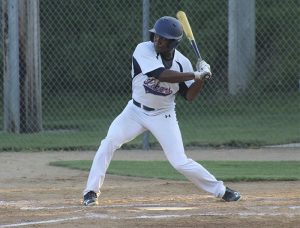 Perhaps the most exciting game was the home game on July 14, against Bancroft. The Lakers hadn’t scored a run all game and entered the final inning in a three-run deficit. The team rallied to pull of the comeback, beating the Bandits 4-3 with a walk-off single.

Leading the Lakers in batting was Hunter Waning; he finished the season with a .300 batting average, recording 24 hits and striking out 14 times. Waning was followed closely by Evan Keyser and Freddy Gonzalez, who finished with a .291 and .283 average, respectively. Kayser had 23 hits and struck out 20 times, while Gonzalez had 17 hits and 16 strikeouts.

Schumacher had one final thank you before the Lakers leave town.

“I would like to thank the host families for opening up their homes to these young men,” Schumacher said. “I have received nothing but positive feedback from players and host families.”

With the bleachers full for nearly every home game, the Lakers were widely supported throughout the community — a good sign that the Lakers will likely be back for their second season in Albert Lea for the summer of 2018.