‘Life is full of surprises’ 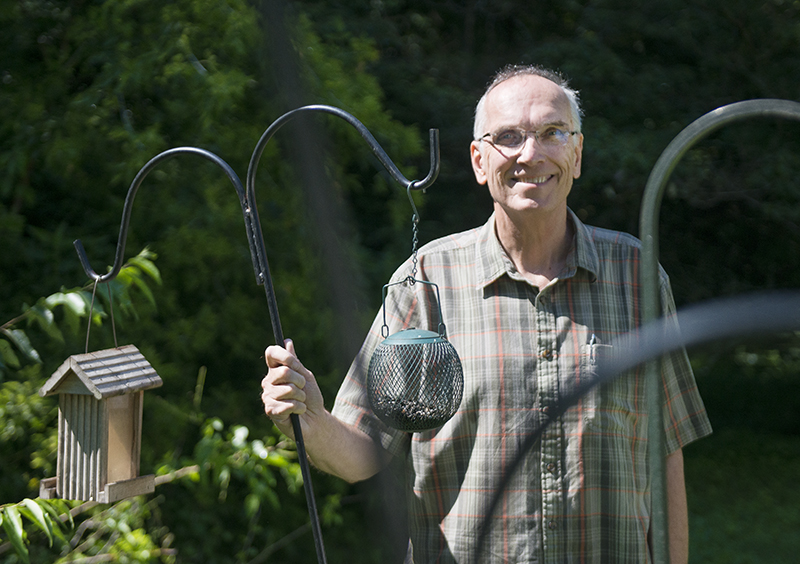 Nature enthusiast Al Batt, pictured with a number of the bird feeders that surround his Hartland home, was diagnosed with cancer in December 2016. He has been named an Honorary Survivor for this year's Freeborn County Relay for Life. - Colleen Harrison/Albert Lea Tribune

Hartland resident will be honored at local Relay for Life

Hartland resident Al Batt never had any major health issues for well over 60 years — no prescriptions, no high blood pressure or cholesterol, nothing to worry about.

That is, until he was diagnosed with cancer last year.

In December 2016, Batt went in for his yearly physical. A routine colonoscopy alerted doctors right away to the fact that Batt had a rectal tumor. To say the news was shocking to Batt — who has no major family history of cancer — is putting it lightly.

After recovering from the initial shock, Batt signed up for a clinical study out of Rochester for his cancer treatment. The treatment entails 288 hours of chemotherapy without radiation, surgery to remove the tumor and any other cancerous tissue, 288 more hours of chemo, and then finally reconstructive surgery.

According to Batt, his decision to partake in a study instead of a routine treatment was an easy one.

“You like to do one noble thing in life,” he said. “Maybe it’ll help someone down the road.”

Batt, now 68, has made it a little over halfway through the treatment, and is currently on his second round of 288 chemo hours. His chemo is administered for 48 hours at a time. His first surgery was in May, hospitalizing him for 17 days. With his surgeries and first round of chemo having been in Rochester, Batt said he’s grateful that his second round can be done in Albert Lea. His reconstructive surgery should be sometime in October.

An active writer and public speaker, Batt said he has had to cancel over 40 speaking engagements throughout this year. What hurts him the most, though, is that he has missed seeing his five grandchildren in 27 of their baseball, softball and basketball games. He said he even forgot one speaking engagement — something he has never done before, and still feels guilty about it to this day.

The forgetfulness is a side effect of the chemo, he said, also referred to as “chemo-brain.” Another major side effect of the treatment is fatigue, and Batt said he has had to pull back from his normal routine of gardening and other activities, as he tires out quickly. Chemo has also led to Batt having to be prescribed medication to stop him from hiccuping for hours on end. He has lost 50 pounds since his diagnosis, and currently has to use an ostomy bag, which he hopes will be gone following his second surgery. The chemo has affected his taste buds, as well. Caramel, one of Batt’s favorites, now tastes metallic to him. He said he eats more peppers now, as the spiciness is something he can actually still taste.

Batt has been open about his diagnosis, and has written columns about it and talked about it on radio shows. As a result, people have reached out to him and told him they’ve gone to the doctor themselves to make sure they keep up with regular physicals. His openness on the subject is likely a major reason for why Batt was selected as one of two Honorary Survivors for the American Cancer Society’s Freeborn County Relay for Life. The Freeborn County Relay for Life will start at 6 p.m. July 28 at the Freeborn County Fairgrounds.

Jokingly, Batt said he thought he might one day receive an honorary PhD for his writing, but that being named an Honorary Survivor is something he’ll gladly take instead.

“This is much better. I’m honored,” he said. “Life is full of surprises.”

A positive that has come out of Batt’s cancer ordeal is how kind people have been. People he has lost touch with have come back into his life to offer their support, he said. People routinely call to check up on him, asking him if he needs a ride to appointments or wants to get lunch. Batt’s wife, Gail, has been a major support, he said, as has his son, Brian, and daughter-in-law, Laura.

“It’s incredible what gifts people are given,” he said. “Maybe people with cancer are given the gift of kindness.”

Batt urged those battling cancer to stay positive, despite how hard that can seem. For him, sometimes it’s focusing on the little things.

“For me, a good day can be a little Louis Armstrong, some Leonard Cohen, and maybe some Billie Holiday or Eric Clapton,” Batt said.

He considers himself lucky to have the people in his life who he does, and lucky that medical science is where it is today.

“If my grandpa had received this diagnosis, it’d be a death sentence,” he said. “Today, it’s not.”