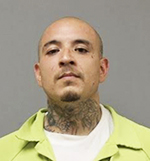 Court documents state Naranjo was charged after an Albert Lea police officer was dispatched Saturday to 1005 S. Broadway Ave. on a report of an emergency. The alleged victim, who was in a relationship with Naranjo at the time of the incident, said they had gotten into an argument after his car was repossessed.

Court documents state she reported he strangled and sexually assaulted her, as well as threatened to shoot her and another family member.

The alleged victim reportedly had bruises across her body, as well as a mark inside her lower lip.

Court documents state Naranjo was found Sunday at another residence. After being arrested and taken to the police station, he reportedly admitted they were in a physical argument over the vehicle. He claimed the alleged victim was the aggressor and denied any nonconsensual sexual activity.

Naranjo reportedly has a prior conviction for misdemeanor domestic assault in May 2015 in Pocahontas County, Iowa.

Third-degree criminal sexual conduct carries a maximum sentence of 15 years in prison and a $30,000 fine.