Marilyn J. Schilling passed away at her home Friday, July 14, 2017, two days from her 81st birthday after a three-year battle with lung cancer and lupus. Her body has been donated to Mayo in Rochester.

Mary was born July 17, 1936, to Hugo and Lola (Domino) Auer in Austin. She attended Austin School and graduated in 1955 from Austin High School. She married Harold Truesdell in Sept. 1955 in Elkader, Iowa. They had two sons: Scott and Brian (Gail Larson). They lived in many places over their years together: St. Paul; Hastings; Northfield; Albert Lea; Rapid City, South Dakota; Rockerville, South Dakota; Sheridan, Wyoming; and Las Vegas. They owned bars, a barber shop, Goldmine Liquor Store and The Traveling Pet Zoo. 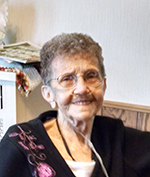 Harold passed away unexpectedly in December 1974 in Sheridan, and that brought Mary and the boys back to Albert Lea. She married Ken Schilling in July 1976 and she remained in Albert Lea for the rest of her life. Ken passed away in March 1990.

She had various jobs in Albert Lea: Drommer Country Boy for four years, in the Walmart deli for four years, McDonald’s breakfast manager for six years and most recently at Mayo Clinic Health System in housekeeping and laundry for 18 years. She loved to work.

She was very proud of her 42 years of sobriety. It was very important right to the very end of her life. She loved to bake and flower gardening at her home. If you met her you didn’t forget her. She was one of a kind and stubborn to the end. She would tell it like it is and if you didn’t like it, tough; no B.S. with her. She was a kind person who would do anything for anyone.

The family would like to give a special thanks to Erika Truesdell for all her help over the years and Donna Hollrah for being there for her all this time. They would also like to thank Mayo Clinic Health System, Hospice, St. John’s Lutheran Community and all the people who cared for Marilyn over the last three years. Thank you and God bless you all. She will be sadly missed by many family and friends.

A memorial service is planned for 1 p.m. Sunday at Christ Episcopal Church in Albert Lea. The Rev. Henry Doyle will officiate.