Marvin “Bob” Conrad Rebelein, 92, of Kiester died Friday, July 7, 2017, at Good Samaritan Society of Albert Lea. A funeral service will be at 2 p.m. Tuesday at Our Savior’s Lutheran Church in Kiester with the Rev. Katie Pals officiating. Visitation will be one hour prior to the service at the church. Military honors will be accorded by Kiester American Legion Post No. 454. Interment will be at Our Savior’s Lutheran Cemetery in Kiester. Memorials are preferred to Pheasants Forever. Bruss-Heitner Funeral Home in Wells is assisting the family. To leave an online condolence, visit www.brussheitner.com. 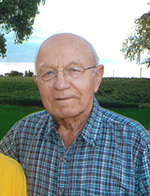 Marvin Conrad was born April 14, 1925, in Kiester Township, Faribault County, the son of Bernard J. and Rosetta (Scherb) Rebelein. Bob graduated from Kiester High School in 1943, where he enjoyed playing clarinet in the band. He was commissioned as a warrant officer for the U.S. Coast Guard Merchant Marines.

After honorably serving his country, he was united in marriage to Elaine M. Engebretson on Aug. 25, 1948, at Bethel Lutheran Church in Vinje, Iowa, and to this union six children were born. Bob was proud of his third-generation century farm, which was the life-long family farm, originally homesteaded by his grandfather when he came to the United States from Germany.

Bob and Elaine loved to go bowling and dancing together. He was also an amateur photographer and enjoyed working on motorcycles and cars. His mechanical skills were especially important on the farm. Bob was a conservationist, caring for the land and returning a portion of the farmland back to wetland/prairie. He had a dry sense of humor, which he retained throughout his life.

He was a faithful and active member of Our Savior’s Lutheran Church, where he taught Sunday school for many years, was on the church council and sang in the choir.

He is preceded in death by his parents; sister, Elizabeth Rebelein; daughter, Denise McGovern; and granddaughter, Hana Riedinger.