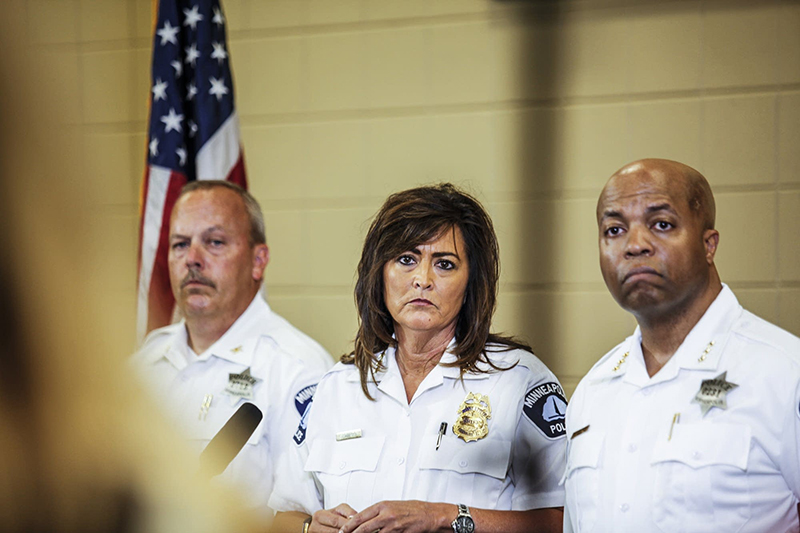 After coming under fire for the police shooting of Justine Ruszczyk, Minneapolis police chief Janee Harteau has resigned.

A statement released Friday afternoon reads in part, “Despite the MPD’s many accomplishments under my leadership over these years and my love for the city, I have to put the communities we serve first. I’ve decided I am willing to step aside to let a fresh set of leadership eyes see what more can be done for the MPD to be the very best it can be. The city of Minneapolis deserves the very best.”

Mayor Betsy Hodges had asked for her resignation, and accepted it immediately.

In a press release, Hodges said, “As far as we have come, I’ve lost confidence in the chief’s ability to lead us further — and from the many conversations I’ve had with people around our city, especially this week, it is clear that she has lost the confidence of the people of Minneapolis, as well. For us to continue to transform policing — and community trust in policing — we need new leadership at MPD.

“In conversation with the chief today, she and I agreed that she would step aside to make way for new leadership.”

Hodges announced she will nominate the current assistant chief Medaria Arradondo as police chief, expressing her confidence in his ability to lead change in the police department.

“The experience of working closely with him over the past week, which has been so hard on everyone in Minneapolis, has solidified my confidence,” she said in a statement.

Arradondo will also lead the department for the remainder of Harteau’s term, Hodges said.

As Hodges made a statement before media Friday night, she was interrupted by protesters not happy that Hodges herself was not stepping down.

A group of around 40 people surged toward Hodges, as she continued to attempt to speak, eventually forcing her to leave the room.

When the mayor returned, she was asked by reporters if she considered leaving ahead of her term’s end. She said she was not resigning.

Some Minneapolis City Council members were calling for major changes in the police department, including a new chief, in the wake of an incident where a police officer shot and killed a 911 caller.

“I’m done with damage control and crisis management,” council member Linea Palmisano told her colleagues on Friday. “Day by day, I’m moving beyond sadness and I am angry. My constituents are angry. And now is the time to turn emotion into action.”

Palmisano represents the Fulton neighborhood where Justine Ruszczyk was killed. Ruszczyk, known professionally as Justine Damond, called police late Saturday night to report that she thought a woman was being attacked outside her home. Minutes later Ruszczyk was dead, shot by one of the responding officers as she stood near the police squad car.

A preliminary Minnesota Bureau of Criminal Apprehension report said officer Mohamed Noor was in the squad’s passenger seat while his partner, officer Matthew Harrity, drove through an alley near Washburn and Xerxes Avenues with the car’s lights off.

Harrity reported being “startled” by a sound coming from near their squad car, the BCA said. The agency, which is still investigating, didn’t make clear what, if anything else, happened before Noor fired his weapon, fatally striking Ruszczyk in the abdomen.

Based on the BCA’s preliminary findings, Harteau on Thursday criticized Noor’s actions, saying that ran contrary to Minneapolis police training and expectations, and adding, “Justine didn’t have to die.”

Harteau also announced intentions to boost training and technology on police body cameras and their use.

Harteau’s words, however, did not appear to appease Palmisano.

“I will be pushing for fundamental changes in our police department, from top to bottom, and I ask you as my colleagues to join in these efforts,” she told council members Friday.

Harteau on Thursday responded to criticism that she did not return immediately to the city after the shooting. She said she was on personal time, backpacking in a remote mountainous area and had attempted to return.

Minneapolis NAACP president Jason Sole said it was time for Harteau to go. He said the chief should have come back from her vacation earlier, when she heard about the Ruszczyk shooting.

Sole has been critical of how Harteau has handled past fatal police shootings.

“We were calling for this when we saw how she was handling the Jamar Clark killing,” he said. “She’s made too many critical mistakes at important times.”

Council member Jacob Frey, who is also running for mayor, said he believes it was time to replace Harteau.

“When we talk about an individual that was shot following a 911 call with no evidence whatsoever, either visual or otherwise on body cameras,” he said, “I think we have to recognize we have a problem.”

Harteau was nominated chief by then-mayor R.T. Rybak in 2012, and was the first female and first openly gay police chief in Minneapolis history. She was sworn in Dec. 4, 2012, at a ceremony at City Hall.

Harteau joined the police department in 1987 and rose through the ranks, becoming assistant police chief in 2011. She was inspector of the downtown precinct for three years and in 2009 she was made deputy chief of the Patrol Bureau.

Harteau is a Duluth native with both French Canadian and Native American family roots.

Assistant chief Arradondo joined the police department in 1989 as a patrol officer in the 3rd Precinct. He has served as a school resource officer, a beat officer on the north side, in internal affairs and property-crime investigation. He was inspector for the 1st Precinct, a deputy chief and chief of staff.