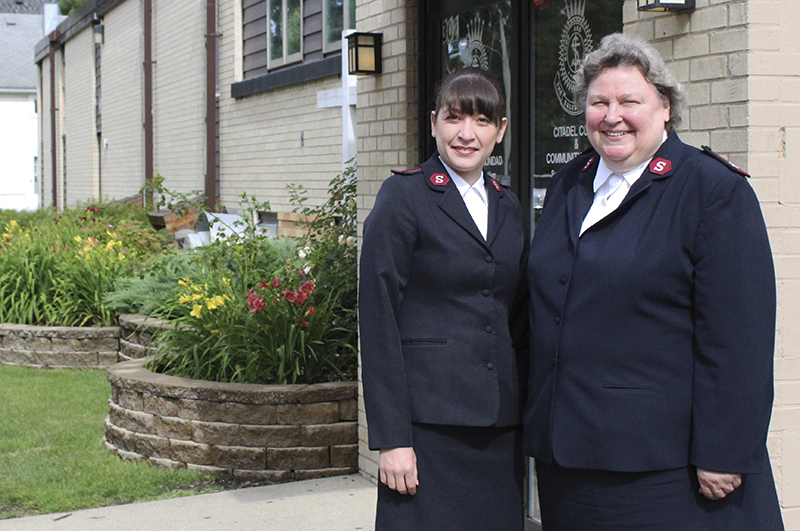 The Albert Lea Salvation Army has two new leaders at its helm.

Although the pair has been in Albert Lea for only a few weeks now, the ladies have set their sights on specific goals.

Together with Lt. Gloria Pelayo, Hunt will lead the organization in Albert Lea.

Pelayo was born in California. When she was 7 months old, her mother took her to Mexico. Pelayo was raised in Mexico and moved to Chicago when she was 20 years old. Pelayo was introduced to the Salvation Army as a church.

“I like the ministry, I feel that I love it and I had a calling to be an officer,” Pelayo said. “I applied for an officership, but I didn’t know English back then — so while I worked on my English I was an intern.”

While interning for the Salvation Army, Pelayo found her love for social work. Although she knew the church side of the organization, she did not know the social work side until her internship.

“When I got into training, I met Major Sandy — she was my teacher,” Pelayo said.

Pelayo said she had something to check off her bucket list now that she moved to Minnesota.

“When I was living in Chicago, I was always complaining about the snow. When I found out I was going to come (to Minnesota), a person told me that it gets so cold that the lakes get frozen — that people make holes in the lakes and they put up tents, and it is like a family thing — and they sit around the hole and they fish!”

Pelayo said she thought her friend was joking or that he was trying to scare her.

She also said that a friend had told her it gets so cold in Minnesota that people have to put heaters in their cars.

“I would like to see. I don’t think I could handle the fishing, but I’d like to see how it works,” Pelayo said.

Pelayo said she hopes to start a Hispanic congregation in Albert Lea.

Hunt was born and raised in Chicago.

Unlike many officers in the Salvation Army, Hunt did not grow up with a family involved with the organization.

The training college is like a seminary of the protestant denomination for the Salvation Army. The school is in Chicago — where Hunt and Pelayo met.

Although the organization is more well known for social work, Hunt said the church is the reason they do social work — “because we believe that God wants us to be helping people.”

After school, Hunt spent four years with the Salvation Army in Cloquet and then returned to the training college as a teacher for nine years.

“And now I am here,” Hunt said with a smile.

She said she is nearing retirement and that she has about five years to go.

“I am assuming this will be one of my last places,” Hunt said. Hunt hopes to retire back in the Chicago area, where her family lives.

Hunt has a goal to continue the great work started in Albert Lea, while also reaching out to start new ministries.

“My goal is just to enjoy the ministry here, really. I would just like to see it continue on and reach out to more people,” Hunt said.

Pelayo and Hunt hope to work together to reach out to the Spanish community in Freeborn County.

Hunt would like to check a sled dog ride off of her bucket list while in Minnesota.

What to give to the Albert Lea Salvation Army?

• Donate and shop at a local store. Donate unwanted things laying around the house including clothing, furniture, cookware and more. The items donated and money spent in the thrift store can fund different programs to help families.

• Give a one-time or monthly donation online at salvationarmyusa.org, or send checks to Salvation Army, 2445 Prior Ave., Roseville, MN 55113.