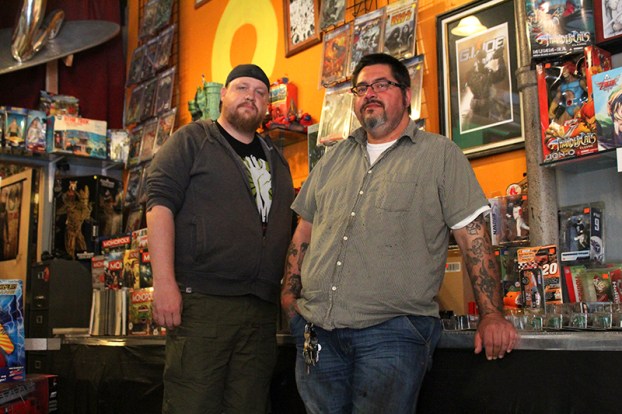 Pop culture convention to ‘Blow your socks off’

After 18 months of planning, the first convention of its kind will debut in Albert Lea next weekend.

On July 22 and 23, comic geeks and nerds of all kinds will flood the Albert Lea community in a convention that will — as outlined by the organizers — “blow the socks off anything the area has seen before.”

Chapel Con, as it has been deemed, will host celebrities and cosplayers from shows such as “The Walking Dead,” AMC’s “Comic Book Men,” “Married with Children,” “Breaking Bad,” “Power Rangers,” “Land of the Dead” and the original “The Incredible Hulk.”

The convention, which will be hosted at Albert Lea City Arena, will feature over 100 vendors and artists from all around the country.

“We want a convention — we want what you see on TV in San Diego — we want that here,” said Gilbert Johnson Jr., one of the two organizers.

Johnson is the owner of The Chapel at 115 S. Broadway Ave. in Albert Lea. His business sells comics and collectibles as well as tattoo services in a secondary branch.

The other organizer, Randy Harig, is the man who initiated the process to plan Chapel Con. As lifelong collectors, both Harig and Johnson said they are passionate about the pop culture genre. Besides short hiatuses, both men have lived in Albert Lea for most of their lives.

“Randy just came to me one day and says, ‘Hey, we should do a comic convention in town,’ and I said, ‘Yeah, I have always wanted to,’” Johnson said. “The next day, (Harig) comes back and says, ‘Hey, I set up an appointment with Bob out at the arena.’ That is kind of how it started, it was Randy’s whole push.”

Johnson was concerned that he did not have the time to take on such a feat. Harig told Johnson that he was in luck — “for what you can’t do, I can help,” Harig said.

A goal of the convention will be to bring people to the community and immerse them in the culture of the area. The Chapel Con organizers have partnered with community groups and businesses such as the city of Albert Lea Parks and Recreation Department, the Freeborn County Arts Initiative and The 112 on Broadway.

“We are kind of trying to change the idea of Albert Lea and give us some stuff to do,” Johnson said.

The men did not have a concrete vision for what the show would become. Rather, they said the show has “morphed into what it has become.”

Harig and Johnson agreed that the four areas necessary for a successful comic convention are celebrities, cosplayers, vendors and artists. However, the pair did not stop there — TV, movies, vinyl and costuming will also be part of the show.

Johnson said he thought the important part of the show is that everybody hears “comic convention” and they think — comics, and that is it.

“We are trying to do more of a pop culture show — not comics,” Johnson said. “If you don’t even like comics, there is going to be plenty of stuff you’re going to love at this show.”

The organizers said a lot of

people shy away from comic conventions because they think they are nothing but comics.

“There is something for everyone,” Harig said.

One goal of both Johnson and Harig was to keep the ticket prices low. The men did not organize the event in hopes of making a profit. They said if there is a profit from this year’s event, the money will be saved for next year’s efforts.

Although plans for a repeat event are not set in stone, Johnson and Harig hope the event is successful enough to bring it back to Albert Lea next year.

“People are proud to have it here though,” Harig said. The Chapel Con organizers have been promoting the event for some time now, including at the July Third Parade in Albert Lea. Dozens of volunteers showed up in costumes to walk in the parade and promote the event. Contests for free tickets have helped promote the event and gauge interest.

“I ran wrestling shows, and I saw kids come in and smile and have a good time — that kind of thing — where someone can be just genuinely excited, is so lost anymore. When you watch the news or anything, everything is so glum and gray. I just look forward to bringing something here that people can lay all that back inside and just have fun for a couple days,” Harig said.

For more information on the event, visit chapelcon.com or the Chapel Con Facebook page.

Albert Lea City Arena is at 701 Lake Chapeau Drive in Albert Lea. Since parking at the arena is limited, chapelcon.com will have updated transportation options in the coming days.

Man started with drawing, finds painting to be his greatest passion As far back as Albert Lean David Lenz can... read more