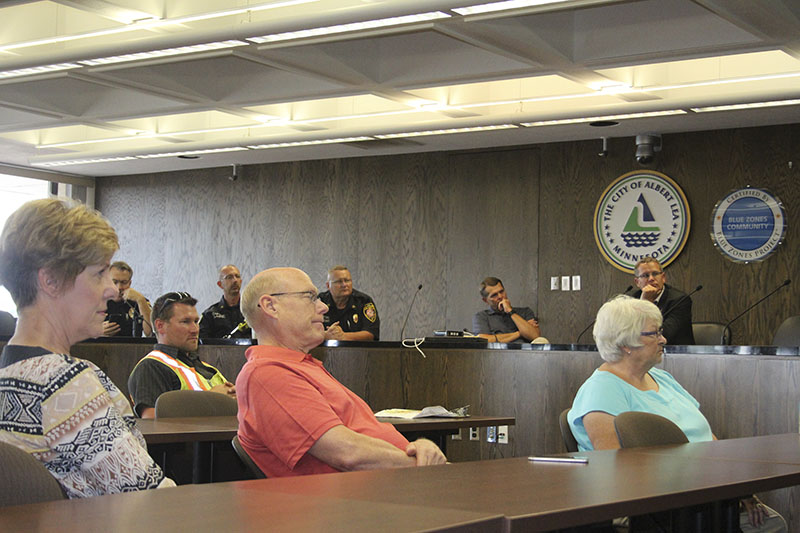 Community members expressed support on Monday for placing a possible new fire station for the Albert Lea Fire Department at Blazing Star Landing or on East Main Street at a community meeting.

The meeting in Albert Lea City Council Chambers came after the council last month approved moving forward with the two locations for the proposed fire station.

Matt Benda, who co-owns property on East Main Street near one of the proposed sites, said he understands his primary building will not affected by the project, and he expressed support for the plan.

“I think there’s a lot of potential for it,” he said. “And I think that East Main Street location — it’s a great location, and I think we could work together as neighbors.”

“I’d like to keep Blazing Star (Landing) site for people coming in who are actually going to pay some taxes so we can get a larger tax base for our city,” she said.

Albert Lea 3rd Ward Councilor Jason Howland said constituents have told him they prefer the fire station to be at Blazing Star Landing because the city already owns the land.

Albert Lea Deputy Fire Chief Jeff Laskowske said the East Main Street location would provide a centralized spot, allow for redevelopment of the area that includes a Subway building and a building that formerly housed Domino’s Pizza, as well as provide training space. Drawbacks of the site included it being slightly smaller than the amount of acreage the city desires, the cost of purchasing the two buildings and other factors.

Laskowske said if the fire station is at Blazing Star Landing, it could be next to planned development on the site. Minimal to no site development expense is needed at Blazing Star Landing, and the location would allow for a reasonable construction timeline, he said. Drawbacks to the location that have been cited by the city are infrastructure readiness, the location being on the east edge of the ideal response time and the site’s possible impact on taxable value.

Laskowske discussed space restrictions at the current facility as the main reason why a new facility is needed.

Site selection is expected to be finalized by October, and construction completion and occupancy of a new fire facility is planned for 2019.

Albert Lea City Manager Chad Adams said once the Fire Department moves to a new location, parts of the current fire facility could address the current lack of room for meetings and employee bathroom and break room space at City Hall, as well as serve as a possible location for Albert Lea Parks and Recreation departments and Albert Lea Community Education.

After the meeting, Sherry Seberson said she supports placing the fire station at Blazing Star Landing.