Funeral Services for Ronald Lamarr Sorenson of Albert Lea will be at 11 a.m. Thursday at Grace Lutheran Church in Albert Lea. The Rev. Shane Koepke will officiate. Interment will be in Graceland Cemetery. Visitation will be from 4 to 7 p.m. today at Bonnerup Funeral Service in Albert Lea, and one hour before the service at the church.

Ronald (Ron) Sorenson passed away peacefully Tuesday July 11, 2017, at St. John’s Lutheran Community surrounded by his family. He was 79.

Ronald Lamarr Sorenson was born March 10, 1938, in Albert Lea to Ernest and Stella (Erickson) Sorenson. He was baptized and confirmed at Trinity Lutheran Church. He graduated from Albert Lea High School in 1956. He was united in marriage to Virginia King at First Lutheran Church in 1958. They were blessed with two children, Cindy and Connie. 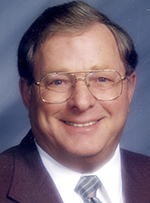 He was employed by Interstate Power for over 35 years, starting as a meter reader and retiring as gas superintendent in 1998. He was a lifetime resident of Albert Lea and a member of Grace Lutheran Church. Ron became a member of the Fraternal Order of Eagles Aerie 2258 in April 1959 and became active right away. He was a proud member of the Aerie ritual team from 1959 to 2007. He enjoyed not only his local ritual team members, but all the friends he made throughout the state and nation. He was national ritual chairman from 2003 until 2012. He became the Aerie’s youngest president in 1962, and was selected local, district and state Eagle of the Year in 1969. From 1990 to 1991 he served as Minnesota state Aerie president and Minnesota state treasurer from 1992 to 2013. From 1994 to 1995 he served as north central regional president. Ron was a popular Eagles event speaker. He became a member of the Minnesota Hall of Fame in 1995, and the National Hall of Fame in 2007 and 2012. Ron was a very proud member of the Eagles. He was a board member for the Home On The Range for Boys and Girls in Sentinel Butte, North Dakota. Ron became an active member of Sertoma in 1983 and served three terms as president. He was given the Sertoman of the Year award in 1990.

Ron was elected to the 5th Ward as a city councilor from 1977 to 1985, and to the 4th Ward from 1995 to 2002. His hobbies included reading newspapers and keeping up with current affairs.

Ron was preceded in death by parents Ernie and Stella Sorenson; parents-in-law Frank and Deloris King; sister, Marilyn, and her husband, Elvin Reim; brothers Bud and his wife, Shirley, Duane and Harlowe Sorenson; and sisters-in-law Rosemary King and Beverly King.

Ron knew he had Alzheimer’s and before the fall that changed their lives, he and Virginia enjoyed simple times together, like their morning Kwik Trip coffee, and maybe a donut. After the second fall, all they could do was enjoy special moments at St. John’s. No matter whether it was at work, city council, service clubs or having coffee, Ron very much enjoyed his friends and coworkers. He always said it was more important to have respect than be popular. He was loved.