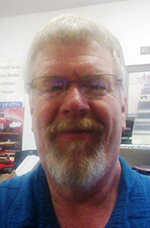 Tom was born Dec. 4, 1959, in Austin to Thomas W. and Delores Nims. He grew up in Austin and graduated from Austin High School. Tom was the owner of Mr. Machinery Inc.

He was kind to a fault and always willing to share his extensive knowledge in woodworking and metal working with his customers. In 2005, Tom moved his business to Hollandale. He enjoyed the people of Hollandale, being a part of the small town community and was serving his third term on the city council. Tom was always willing to lend a hand and helped with the city lawn, mowing and snow plowing.

On May 17, 2014, he was united in marriage to Shelly (Rysavy) Madsen at their home in Hollandale. In their three years together they enjoyed taking trips, riding their Harley and cheering on the local drivers at the race track.

Tom enjoyed spending time with his family and friends. A highlight was watching his grandchildren participate in events and activities.

He is preceded in death by his parents.

A funeral service will be at 11 a.m. Tuesday at Hollandale Reformed Church with the Rev. Neal Ooms officiating. Friends may call from 5 to 8 p.m. Monday at Mayer Funeral Home and one hour before the service at the church on Tuesday. Interment will be in Oakwood Cemetery.