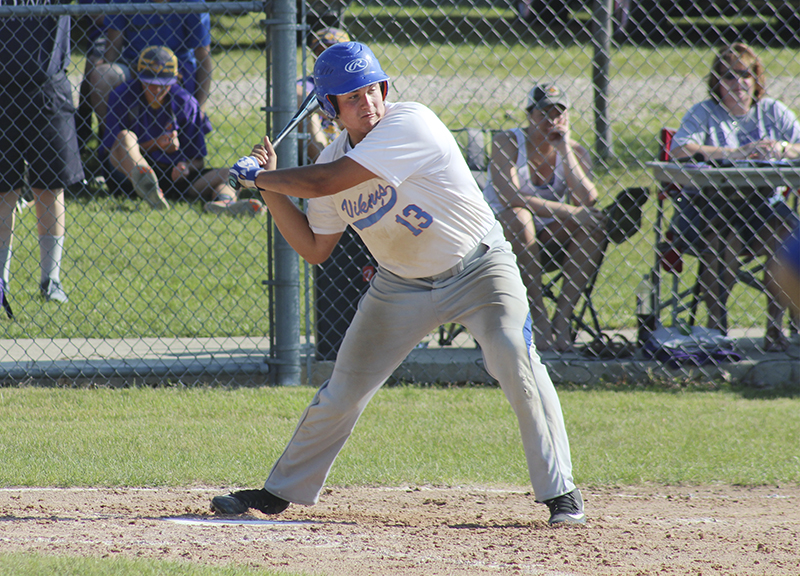 Junior Garrett Thompson waits on a pitch in the first inning of the Vikings 11-7 win over the Warriors. Thompson also started at pitcher for the Vikings, going 1 2/3 innings, striking out three batters and giving up three runs. - Tyler Julson/Albert Lea Tribune

Northwood-Kensett baseball runs over North Union in 1st round

LAKE MILLS — The Northwood-Kensett baseball team picked up a first-round playoff win against North Union Tuesday night in Lake Mills. The Vikings played hot offensively and capitalized on nearly all of the Warriors’ mistakes, winning 11-7.

Starting on the mound for the Vikings was junior Garrett Thompson. He pitched 1 2/3 innings, giving up three runs and striking out three batters. Thompson was relieved in the bottom of the second by junior Colten Moretz. Moretz pitched 4 1/3 innings, surrendering three runs while recording eight strikeouts.

In the seventh and final inning, sophomore Trey Waldemar was called in to close out the game. Waldemar let up just one run, securing the victory for the Vikings.

Northwood-Kensett started scoring early in the game, pushing two runs across in the first inning, thanks to an RBI double from sophomore Gavin Varner. 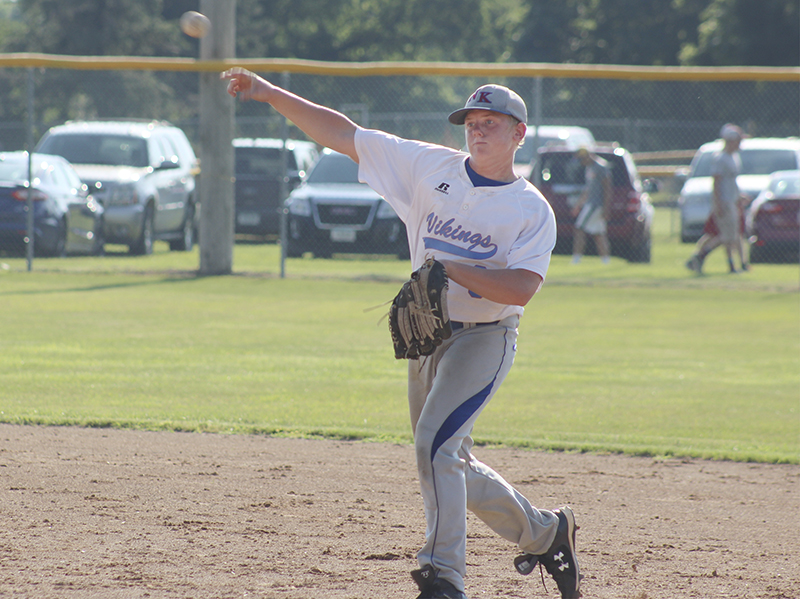 Freshman Cade Hengesteg makes the play at first base early in the Vikings 11-7 win over the Warriors. The win advances the team into the second round of the playoffs. – Tyler Julson/Albert Lea Tribune

North Union added a run of its own after a wild pitch led to a run from Blake Crawmer. The Vikings would widen the gap in the second after a sacrifice fly from Moretz and an RBI single from Cade Hengesteg.

With a lead of 5-1, it seemed like the Vikings were well on their way to an easy victory. However, North Union would tie the game in the bottom of the second with a two-RBI triple from Riley Bauer and an RBI double by Trent Pederson.

The Vikings would go right back on the offensive, scoring four runs in the third inning. Moretz got the scoring started for the Vikings when he crushed a three-RBI home run. The fourth run was scored by an RBI single from Ethan Tasker.

The Vikings would add another run in the fifth inning after an error scored Logan Benjegerdes. Both offenses then cooled off for a few innings, until the Vikings added yet another run on an error.

North Union would try mounting a comeback in its final inning, scoring two runs, loading the bases and bringing the tying run up to bat. However, the lead proved too much to overcome, leaving the Vikings victorious.

The win advances the Vikings into the second round of the playoffs. The team will play the winner of the West Hancock-Lake Mills  game at 5 p.m. Thursday in Fort Dodge.