A second person who allegedly participated in the kidnapping and robbery of a man  last month in Freeborn County made his first appearance on the charge on Friday. 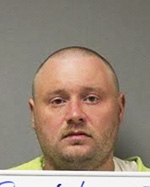 Court documents state Hanson was charged after law enforcement investigated a report of an assault on July 17 — the same day the alleged incident took place.

The alleged victim stated he traveled with another person in a vehicle to a residence in the Albert Lea area July 16, falling asleep after he drove the vehicle into a large shed on the property.

He reported he was woken up early in the morning of July 17 by Hanson beating on the dashboard of the vehicle. Hanson allegedly struck the victim in the back of the head with a timing chain and punched him twice in the left eye. Kenneth Bruce Nelson, 39, allegedly punched the alleged victim once on the left side of his face.

The two allegedly moved the alleged victim to the back seat of the vehicle and attempted to tie him up with plastic zip ties, court documents state. The alleged victim said he was able to break free from the zip ties, so they tied him up by his hands and feet with an extension cord. They allegedly went through the vehicle, asking him “where all the dope was at,” court documents state.

The alleged victim — who reported “he had already gotten rid of all the dope he had,” court documents state — was reportedly threatened by Hanson with a pistol while he was assaulted, and they reportedly stole a CD player and front passenger and driver’s side speakers from the doors.

Hanson reportedly broke the back window of the vehicle and searched the alleged victim, finding $2,250 in cash and one-fourth to one-half of a gram of methamphetamine, before placing the alleged victim in the back of his vehicle.

Court documents state the alleged victim said they traveled into Albert Lea. He reportedly said he was able to exit the vehicle and hop away, since his legs were still bound. The alleged perpetrators reportedly left after he called for help.

Freeborn County District Court Judge Steven Schwab set conditional bail for Hanson at $75,000 on Friday. His next court appearance is scheduled for Aug. 17.

Nelson is charged with kidnapping, first-degree aggravated robbery and false imprisonment. His next court appearance is scheduled for Thursday.