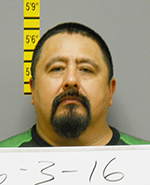 The incidents reportedly occurred between August 2007 and March 2015.

Court documents state the victim was 11 years old when the incidents began.

Sentencing is scheduled for Nov. 1.

Second-degree criminal sexual conduct carries a maximum sentence of 25 years in prison and a $35,000 fine.

Save Our Hospital group members hit the Capitol