An opportunity that comes once in a lifetime 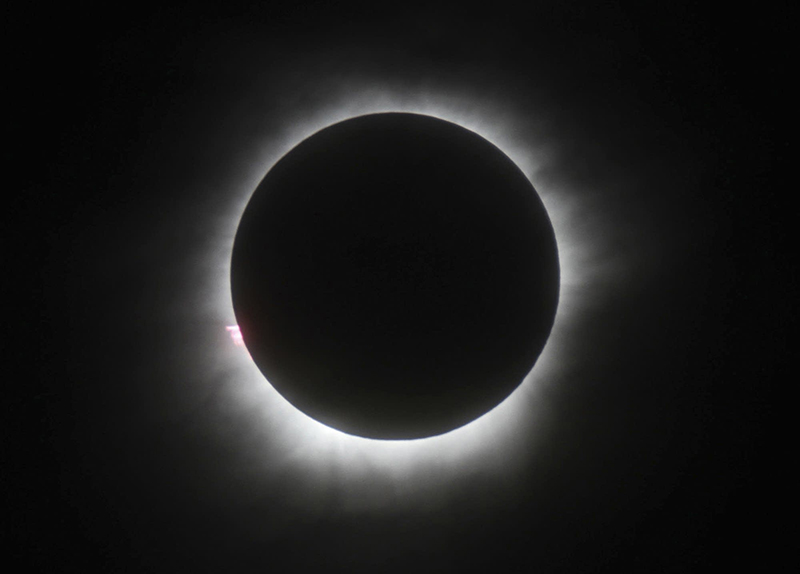 Early Monday afternoon, Aug. 21, the skies will darken across Minnesota as the moon passes in front of the sun. For even the most casual of skygazers, this is a big deal.

It will be the first coast-to-coast solar eclipse the U.S. has seen since 1918. Intergalactically speaking, we’re lucky to be able to see eclipses. We can see them here on Earth only because of the distances that separate Earth, the moon and the sun.

In a few hundred million years, that distance will change enough that creatures on Earth won’t see eclipses.

How much will we be able to see from Minnesota?

While Minnesota isn’t in the path of the eclipse’s totality — which is the moment when the moon fully blots out the light of the sun — for most of the state, between 70 and 90 percent of the sun will be obscured.

The prime time for viewing in Minnesota will likely last from 12:30 to 1:30 p.m. (NASA has made a PDF map showing the intensity of the eclipse at different times across the U.S. The Washington Post has a great explainer, too.)

But before you make plans to catch this rare event, know that it can be dangerous — even partially blinding, permanently — to look at an eclipse without proper eye protection.

Here’s why, according to the producers of the Brains On! science podcast:

“Our eyes are made to take in light, but not this much light.

The sun is really, really, really bright. It’s so bright, that regular sunglasses won’t do you any good if you’re staring right at it. Normal sunglasses block 80-85 percent of visible light.

But there is so much visible light coming from the sun (during an eclipse) that in order to not damage the cells in your eyes, you need to block out 99.9996 percent of it.”

Need another reason to play it safe? Your body can’t tell if your eyes are being burnt in the sun, so you won’t realize anything’s wrong until well after it happens. And the length of time your retinas are exposed to the light doesn’t matter much — even small amounts can damage your eyes.

How to protect your eyes

Protecting your eyes isn’t hard. Many public libraries are giving out free eclipse glasses. But many are also getting bombarded with requests for the glasses, so it’s best to plan on bringing your own.

The American Astronomical Society has a list of reputable places to buy the inexpensive glasses, too. But beware of inadequate glasses, some of which are being sold online. According to the Boston Globe, “the proper lenses should meet what’s called ‘ISO 12312-2’ (sometimes written as ‘ISO 12312-2:2015’) international safety standards.”

You can make your own eye protection, too, like a pinhole projector, for example.

How to make a pinhole projector

What you will need:

Cut down into two pieces — a smaller section that you’ll hold during the eclipse and a larger one to act as the screen.

Then, poke a clean hole with the pin on the smaller piece, which will focus the light. Make sure to keep it as clean as possible.

To use during the eclipse:

Turn away from the sun so the light passes over your shoulder.

Make sure the pieces are arranged so that the sun passes through the pinhole, then onto the cardboard screen.

To focus the image, move the cardboard pieces closer or farther away.