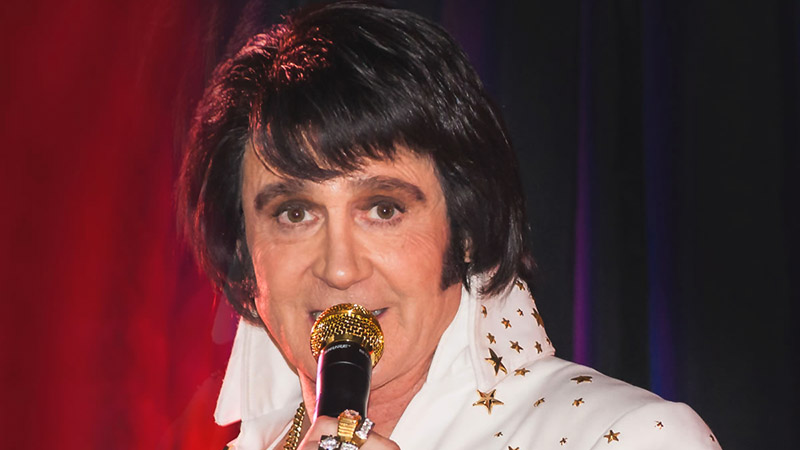 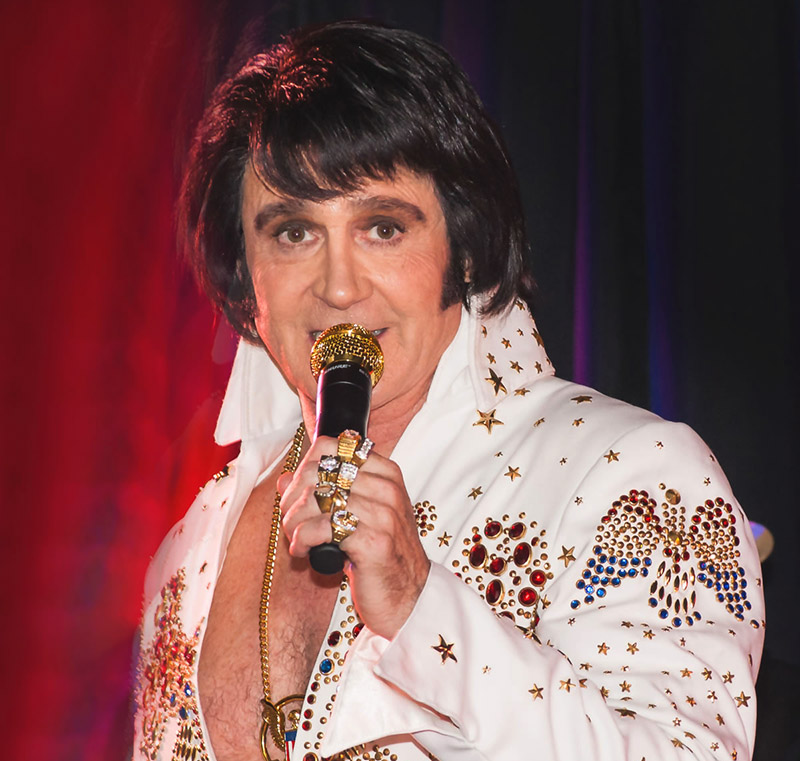 The show is expected to be a fun, classy, high-energy, show featuring tasteful yet dazzling costumes and well-preserved classic Elvis Presley music — with a possible modern twist.

Those in attendance at the show next Saturday in Albert Lea can expect a professional show with plenty of crowd interaction. Without spoiling too many of the surprises, the crowd at  Saturday’s show has a chance to leave with an Elvis scarf, a Hawaiian lei during the song “Blue Hawaii,” teddy bears during the song “Teddy Bear” and of course, nothin’ but a stuffed hound dog during a song that should not have to be explained.

Kistler said the show starts out just like the King of Rock ’n’ Roll did in concert — with the “2001: A Space Odyssey” theme. Kistler said the theme has a tendency to build anticipation throughout the show.

Kistler and the EP Boulevard Show Band try to fit as much music into the show as possible.

“What he did for the world of music and the legacy he left behind and that lives today is pretty amazing,” Kistler said.

Kistler was born in St. Paul and has lived in Minnesota all of his life.

“I started tip-toeing my way into the Elvis thing while singing in my church in 1994 and 1995. Members of the congregation approached me after singing a solo and told me how much I sounded like Elvis,” Kistler said.

Although Kistler thought the congregation’s comments seemed funny at the time, he said that one thing led to another and he was asked to perform as Elvis at a church social on Valentine’s Day in 1996.

“They needed some cheap — aka free — entertainment,” Kistler said about his church gig. “They asked me if I would do some Elvis love ballads during the dinnertime.”

Kistler agreed and he and his wife, Jean, put together “a really hokey outfit.” The Elvis impersonator said he was scared to death the first time he performed in front of a crowd. He also said it was the first time he wore make-up and it was only to cover his mustache.

“I glued sideburns on and went in and played the piano and performed about six Elvis love ballads — and the people there just went crazy. They said, ‘seriously, you need to do this professionally.’”

Not quite sure how to break into the Elvis impersonation field, Kistler and his wife thought a new fad called “karaoke” might be a good way to test the waters. Kistler prepared for and attended a several karaoke events for practice. He also said that it was good to sing in front of people outside of his church because the public was much less forgiving.

“One of the (karaoke bars) was particularly comfortable and people were friendly and nice and forgiving,” Kistler said with a laugh. “It got to the point where I would walk through the door and people would yell, ‘it’s Elvis, Elvis is here, get Elvis up there!’ — and I started liking that.”

Kistler said he was a fan of Elvis Presley’s music at a young age. In about 1959 or 1960, he said he remembers dancing to Elvis’ 45s records on a little old fashioned record players with his three sisters in his grandparent’s basement.

“There was something just magical about his music and his voice and the pace — all of that,” Kistler said. “Even as a child I was a fan.”

Although his wife was lucky enough to see the real Elvis in concert, Kistler was in his teens in 1977 when Elvis passed away. He said at that point in his life, he was more interested in hard rock like The Doors or Led Zepplin than Elvis.

“I have always appreciated his music and I have become quite well studied in it now — I have a deeper appreciation now,” Kistler said.

After gaining some confidence with the karaoke, Kistler started traveling the country to compete in Elvis-tribute contests. He credited his wife, who is a talented seamstress, with his first three jumpsuits to be worn on stage.

“People would look at our outfits and assume they came from some of the big costume makers — and of course, we would just let them think that,” Kistler said.

After doing quite well at the contests, and after becoming quite busy, Kistler started to invest in his new business. He purchased stage lights and sound systems and started performing accompaniment shows for a few years.

Twenty-one years after his initial church gig, Kistler performs on cruise ships and venues across the country with his six-piece band.

Kistler called his journey as an Elvis-tribute artist “an evolution.” From technology to partnerships to music selection to costumes, a lot has changed over the years. Kistler estimated that he knows about 200 Elvis songs now.

As for music, those in attendance on Saturday can expect a wide variety of songs from the King of Rock ’n’ Roll. Kister and the band play quintessential Elvis music while sometimes throwing out a modern twist. There is generally a veteran’s tribute and multiple costume changes at Kistler’s shows.

Although Kistler has not performed in Albert Lea or at the Marion Ross before, he is looking forward to experiencing one of Albert Lea’s historic gemstones.

Tickets for the show are $20 and can be purchased online at actonbroadway.com or at the box office in the Marion Ross Performing Arts Center lobby. Tickets are also available from a 24/7 call center at 1-877-730-3144. The box office opens two hours before the performance on show day.

“We’ve met a lot of fantastic people, and we love the music and it has been an amazing ride,” Kistler said.

Although he does his best to perform just like the King, Kistler said, “there has never been another (Elvis) and there never will be.”

Who: Art Kistler and the EP Boulevard Show Band

What: “Forever Elvis — The Spirit Lives!”