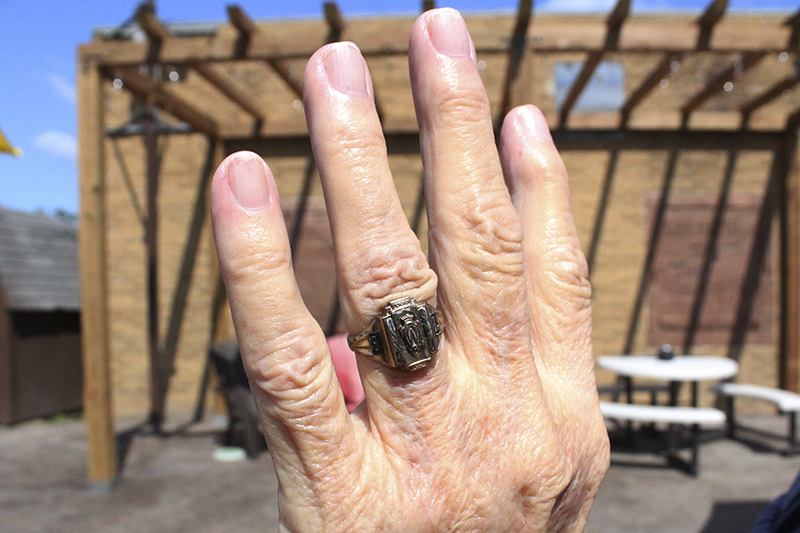 Barb Crumb shows off the ring she bought in 1957. She lost the ring 60 years ago while swimming in Waseca. The ring was returned to her by a Mankato man last month. -Evelyn Seffinga/Albert Lea Tribune

The stars aligned in July when a ring that had been lost for 60 years was finally reunited with its Freeborn owner.

In 1957, Barb (Lechner) Crumb saved $6 of her own money to purchase a class of 1958 ring for her senior year at what used to be Waseca High School.

“I remember, back then, everybody paid for their own ring because the economy was just coming back in the ’50s,” Crumb said. “Everybody was starting to have some money because the war was over.”

Just weeks after the 10-karat gold Jostens ring was in her possession, Crumb, who is now 76, was spending a day at Clear Lake in Waseca when misfortune struck.

“I wasn’t used to wearing (the ring) yet, so I forgot I was wearing it when I got in the water,” she said.

She said the water was not very deep where she was standing when she felt the size 6 ring slip off her finger.

“I searched for hours for the ring, because I knew exactly where I lost it,” Crumb said.

Crumb finally gave up on finding the ring that summer day in 1957. She said she was grateful that at least she had paid for it herself, because she would have felt terrible if her father had paid for it.

Although she never replaced the class ring, Crumb thought about the piece of jewelry on occasion.

Sixty years later, Crumb received a phone call in July from her brother, Bill Lechner, of Waseca. She answered the phone and Lechner said, “Barb, are you sitting down?”

Her brother told her she would be getting a phone call at some point from a man, and what he had to say would not be a joke. 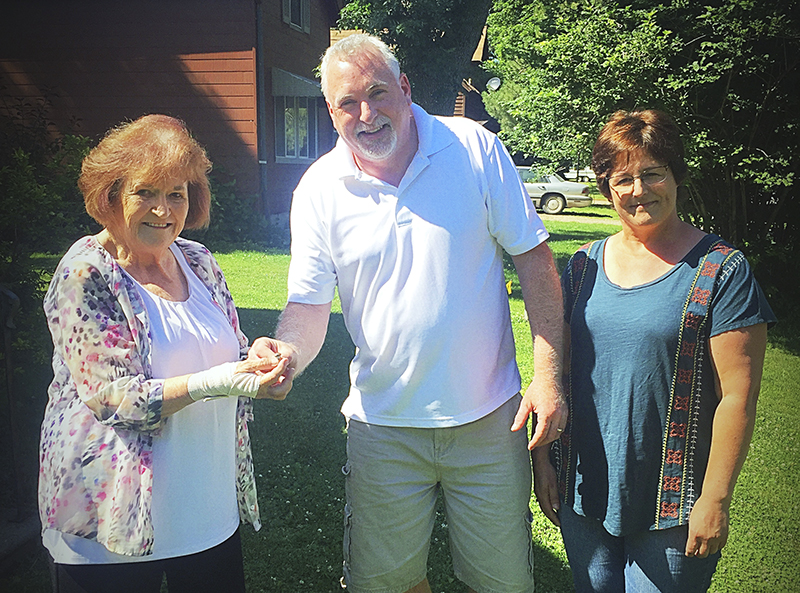 “He called me because he knew I would be shocked — that I would think, ‘Oh, someone is playing tricks on me,’” Crumb said.

On July 16, Crumb received the phone call Lechner had foreshadowed from a Mankato man by the name of Greg Dembouski.

Dembouski, who Crumb said has been metal-detecting for a hobby for about 25 years, took his metal detector to Clear Lake in order to search for history.

Crumb said that Dembouski told her he was searching an area of shoreline when he found a ring with the initials “BL” and the year 1958 engraved in the heirloom.

Dembouski and his wife, Shelly Dembouski, the owners of MGM liquor stores in Mankato, hopped online and began looking for an owner to the ring. The had to get creative with their search because Crumb’s name had changed over the years.

“(Dembouski) found my brother’s name in the Waseca phonebook because he went through the yearbook and saw my name,” Crumb said.

Thankfully, she was the only female in her graduating class with the initials “BL.”

“I knew he had looked it up (in the annual) because he had remembered what was said underneath my picture. Back then, we had sayings — mine said, ‘She loves to dance, she loves to sing, she loves to do most anything,’” Crumb said.

Unsure of how long the ring had been lost, Dembouski returned the ring to Crumb in person at her home in Freeborn and was delighted to hear the story behind it.

Crumb said Dembouski always wanted to return a lost article to someone who had lost it.

Crumb, who still plays the organ at First Congregational Church in New Richland, said she had thought there was a stone on the ring at one point, but later decided there probably wasn’t. The 1958 graduate was surprised at what great condition the ring was in, and that it still fit her left ring finger. Although somewhat discolored, the ring had no physical defects after being buried in muck for 60 years.

Crumb said she enjoyed her grandchildren’s reactions to the story as their grandmother has received a lot of attention since the ring was returned to her.

“I am not one for fame — but I’m thrilled to death that someone wants to see my ring,” Crumb said. “Who in the world, in your wildest dreams, would ever believe in finding it?”