‘I love the people’ 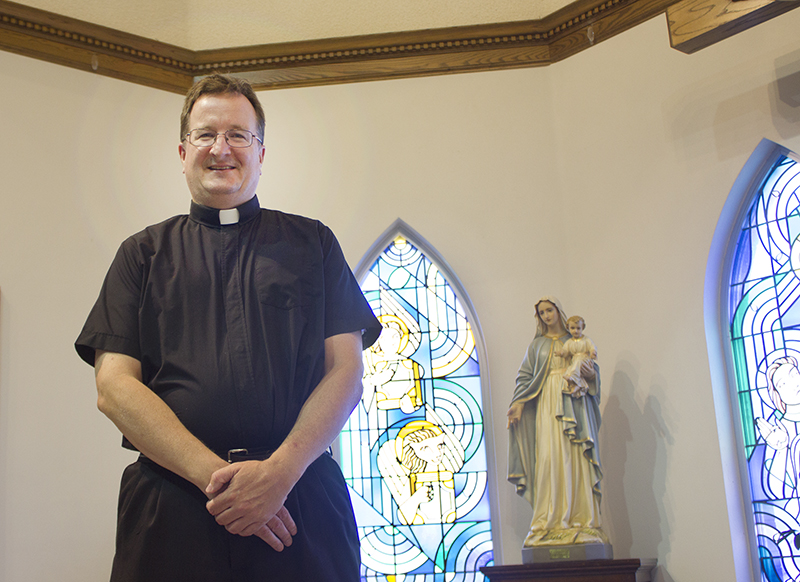 The new leader of St. Theodore’s parish is helping enhance the spiritual lives of parishioners.

The Rev. Kurt Farrell said he began as pastor July 1 and leads weekly masses at 5:15 p.m. Saturdays and 9 a.m. Sundays, as well as a Spanish mass at 11 a.m. Sundays.

He said he decided to become a pastor while spending one year with the National Evangelization Teams Ministry — an organization that travels across the country proclaiming the Gospel.

“It was during that year that I felt inspired to share my faith at a full-time level through the Catholic priesthood,” he said.

Farrell, 47, entered the ministry, spending four years at St. Mary’s University of Minnesota in Winona and four years at Mount St. Mary’s University in Maryland. After he was ordained, Farrell was an associate priest for two years in Rochester before moving to Mankato for one year, where he was the chaplain at Newman Center at Minnesota State University-Mankato and Loyola High School. He also served at St. Joseph the Worker Catholic Church and Holy Family Catholic Church in Lake Crystal.

Farrell said he enjoys the people in the community.

“I love the people,” he said. “I love the diversity of the community.”

Farrell is excited to be involved with St. Theodore Catholic School and youth ministry.

“This great school that we have here at St. Theodore is a very rich opportunity to meet Catholics and non-Catholics alike, and I am very excited about promoting that,” he said.

Farrell enjoys golfing, fishing and playing tennis, and hopes parishioners find in him the presence of Jesus Christ.

“I hope through me they can grow in their own personal relationship to Christ through their Catholic faith,” Farrell said. “I want to be available to them, especially to provide the sacramental life of the church for them, but also counseling and just a friend — someone that will bring them to Jesus when they are discouraged or just need someone to be there for them.”

Spanish masses allow Farrell to say mass to a segment of the community whose first language is not English.

“Albert Lea is a very diverse community, and they have a lot of non-English speaking people here that are Catholic,” he said. “And without a Spanish mass, they will be alienated from the church, but the Spanish mass brings them to the church.”

“People see in me someone that does represent Jesus and someone that can help them to find Jesus, and maybe when they can’t find him otherwise.”