Lawrence John Majeski, 89, of Wells died Monday, Aug. 14, 2017, at Methodist Hospital in Rochester. A funeral service will be at 11 a.m. today at Good Shepherd Lutheran Church. The Rev. Mary Iverson will officiate. Visitation was from 4 to 7 p.m. Wednesday at Bruss-Heitner Funeral Home in Wells and will continue one hour prior to the service at the church. Interment will take place at Rosehill Cemetery and military honors will be accorded by the Wells color guard. Bruss-Heitner Funeral Home in Wells is assisting the family. To leave an online condolence, visit www.brussheitner.com. 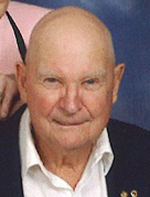 Lawrence John was born July 1, 1928, in Kalama, Washington, the son of Joseph and Edna (Mayo) Majeski. He graduated from Kalama High School in 1948. Larry honorably served his country in the United States Navy. He was united in marriage to Mary Rath, and to this union eight children were born. The couple later divorced. He was united in marriage to Ruth Jepson on Dec. 30, 1988.

Larry was a farmer, zoning inspector and also worked for Gering Industries, ConAgra and Swift. Larry was very active in his community as a volunteer for the Wells Ambulance, a United South Central crossing guard, Boy Scouts leader, Fourth Degree Knights of Columbus, Kernel Days flea market coordinator, Our Lady of Mount Carmel basketball coach, Our Lady of Mount Carmel custodian and a tornado spotter. Larry was also a member of the campfire board, Wells Lions, Wells American Legion and Veterans of Foreign Wars, Easton American Legion and Good Shepherd Lutheran Church in Wells. He enjoyed woodworking and carpentry, but loved fishing and camping. He had a small business, Red Barn Crafts, selling the beautiful things he had built.

He is preceded in death by his parents and grandson, Bradley Majeski.