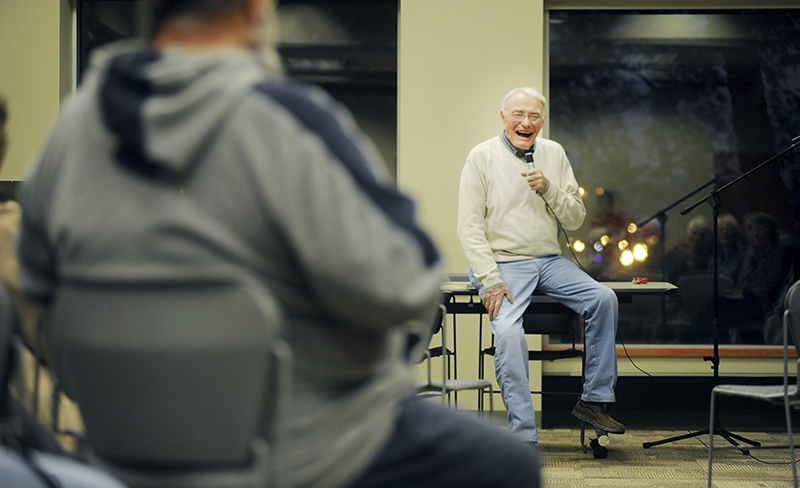 Michael Cotter laughs during a promo stop at the Austin Public Library in 2014 for his book “The Killdeer and Other Stories From Farm Life.” - Tribune file photo

It was a testament to the late storyteller Michael Cotter when his family, gathered at the Cotter homestead a few days after his passing, did not speak of their loss as much as the gifts he left behind.

Cotter, 86, an Austin native, died last week at his home in Albert Lea following a stroke suffered in July.

Cotter was widely known for his talent of telling a story, plain and straightforward, but with a wisdom that made you want to listen. Since the 1980s, thousands had listened to him or read his books; for much of that time, his wife, Bev Jackson Cotter, was at his side.

Tales about the storyteller were told under an overcast sky, in a yard surrounded by farm fields filled with corn and beans and memories.

Tom Cotter, who farms the Cotter acreage, and Michael Cotter’s other son, Marty — an agriculture teacher in the Northwood-Kensett schools — both agreed Michael’s best gift to them was paternity. The sons were adopted and marveled at the fact Michael Cotter raised them as a single dad.

“Dad always apologized for making us grow up too young,” Marty Cotter said. “But I thought it was great.”

The boys worked hard on the farm, located just outside of Austin, and enjoyed the responsibilities of running things while he was gone on a storytelling assignment.

Michael Cotter began his storytelling journey in the 1980s, almost by accident. He attended a workshop about storytelling and, at first, he thought he was out of place.

But when he began telling stories of the farm and the people he knew, his easy-going and humble view of life brought him an ever-increasing number of fans. It wasn’t long before he was organizing storytelling festivals, traveling the country for presentations, and earning awards for his talents.

“To me it seems like an incredible, random story,” Cotter said of his second career, in a 2012 interview. “One thing led to another.”

Marty Cotter recalled how his father, while on a storytelling jaunt, forbid Marty Cotter to plant beans while he was gone. Marty Cotter, however, wanted to impress his dad. He recounted his maiden zig-zag journey with the planter. It was bad enough, he said, that the rows were uneven — but it was in full view of those traveling Interstate 90, too. Michael Cotter was not amused, Marty Cotter said, with a chuckle.

Michael Cotter’s own farm life was tough when he was young. As a child, a tornado took a barn off the farm; later, the family’s house burned. The family had precious little, and had to move into a shed for a time, which they called the bunkhouse.

The troubles did not dim his love of the farm. All agreed that when Cotter was on a visit off the farm, “he couldn’t sit for very long; after a couple of hours, he had to go home, check on things,” Tom Cotter said.

Although Michael Cotter lost one of his farms during the 1980s farm crisis, he held tight to the family homestead — land that spoke to him in a way nothing else did.

Bev Jackson Cotter first saw her husband at a get-together.

“Well, I grew up with farmers,” she said with a chuckle. “I didn’t have the least interest in what they are talking about. I asked a friend, ‘So, he’s a farmer, what’s the big deal?’” A round of laughter shot from the circle as she told the story. 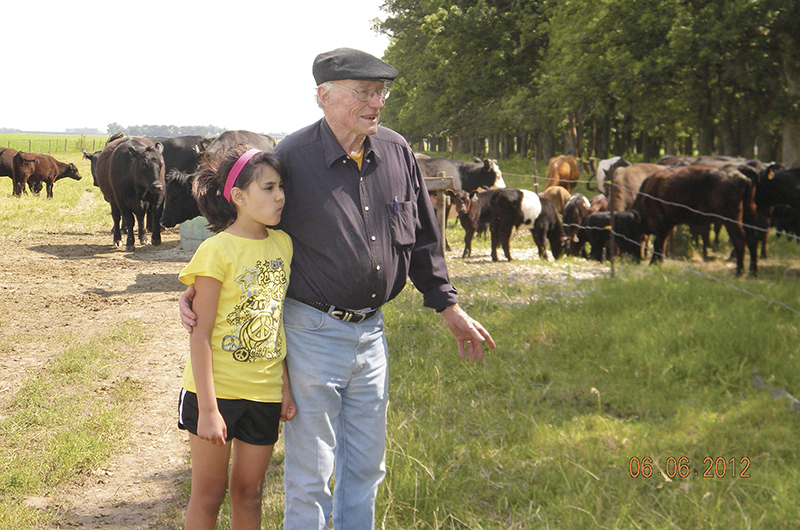 Michael Cotter is pictured with his granddaughter, Vanessa Cotter. – Provided

Her interest warmed, however, when she heard his presentations and got to know the modest farmer from Austin. He was looking for help in preparing a storytelling festival and knew she had experience with such details in her duties as historical society director. About a year later — Bev Jackson Cotter was much more impressed by then — the pair began to date, then marry. Bev Jackson Cotter was also his books’ co-author; she had an innate sense of how to record Michael Cotter’s storyteller’s voice. They traveled the country together for several years, hosted storytelling festivals and gave presentations. Michael and Bev Jackson Cotter lived in Albert Lea, having moved off the farm when Tom Cotter took over.

“And when I think back, I think one of his gifts was that he brought peace to both of our lives,” she said.

Still, they had to get used to each other, which included accepting Michael Cotter’s seeming inability to plan things. Bev Jackson Cotter recalled when she and her husband were headed for a presentation “in a small Iowa town” whose name Michael Cotter at first could not remember. He was able to find the town but still wasn’t sure where in the small burg the presentation was being held. Only a string of vehicles, parked near a building, provided a clue of the get-together’s whereabouts. The couple pulled up and parked, hoping it was the right place.

Fortunately, “a man came out of the door, arms wide, saying, ‘Michael Cotter! We are so glad to have you!’ So then, we knew we were in the right place,” Bev Jackson Cotter said.

Michael Cotter truly loved telling the stories of his family and farm. His wife remembered a time when he was expected to speak for two hours — an incredibly long challenge for a speaker.

“But after it was over, he was energized, he was fine,” Bev Jackson Cotter said. “I remember saying, ‘Had they asked you to speak for three hours, you would have been just fine with that, too.’”

She recalled his talent got him over the border into Canada without a passport.

The pair was due at a presentation in Winnipeg, but then got stopped by customs agents. Neither realized they needed a passport to enter Canada. Neither had one with them — or had time to get one.

“Finally, the agent turned to Michael and said, ‘Are you really a storyteller?’ and Michael said ‘Yes,’ Then the agent said, ‘Tell me a story.’ And so Michael did.”

Convinced of Michael Cotter’s identity, the agent turned to Bev Jackson Cotter, and said, “What do you do?” She told him she was his books’ co-author and showed him one of their books, with her name.

“And that was it; he let us through,” she said with a chuckle.

It was ironic, having a storyteller who could not speak.

Michael Cotter, still active at 86, had presentations scheduled in Cincinnati, St. Paul and at the Iowa State Fair. He had helped haul grain the day he suffered the stroke.

After a week at a Rochester hospital, he came home to Albert Lea.

“His last complete sentence to me was ‘I want to go home,’” Bev Jackson Cotter said.

On the way, the transport service took him to the farm. The family was grateful to the company, called Quality Stretchers, that drove Michael Cotter right into the fields so he could see the cattle and smell the air. They may have all sensed it would be the last time he would see the farm that he loved.

Bev Jackson Cotter made sure his bed was situated in an alcove overlooking Fountain Lake, where he could see the ducks and geese.

The stroke triggered a rapid decline in his speech. Despite his inability to speak, he made connections with family, holding their hands, rolling his eyes when someone made a bad joke. He had a chance to see children and grandchildren. Bev Jackson Cotter sat by his side, holding his hand.

The farmer, the storyteller, the lover of people and family, was ready to move on and he died soon after.

The family said they would plant a tree in his memory, right in the middle of the homestead, “where that bunkhouse would have been,” Tom Cotter said.

It will be a blaze maple, a sturdy and vibrant reminder of the man whose deep passion for the land and his family was realized in many ways, over and over again.

Alma Cotter, his daughter-in-law, recalled the first time she listened to one of his presentations. It was a talk given to veterans, and perhaps one of the better examples of how his talks, told so simply, could send an arrow to the heart.

She said it seemed those attending were not impressed at first, but then, “I noticed heads starting to turn toward him,” she said.

“Then a hand or two would go up, as if to say, ‘I know what you’re talking about.’ All of a sudden, everyone was involved, you could tell — they just loved him,” she said. 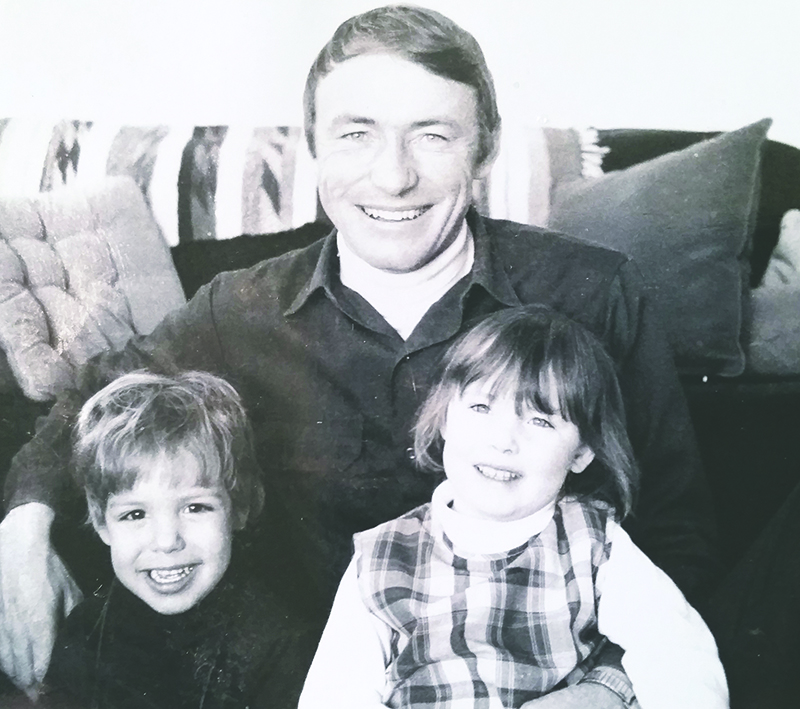 Michael Cotter is pictured with his son, Marty, and daughter, Mary. – Provided