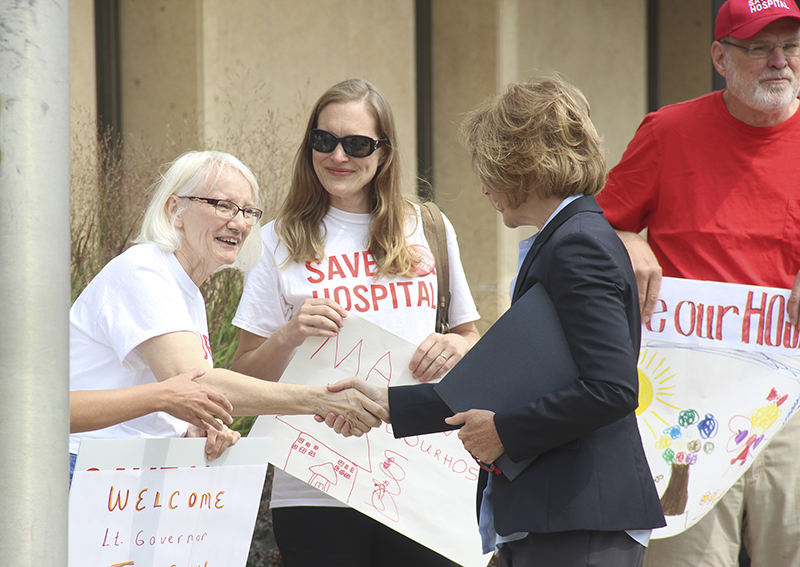 From left, Mary Hinnekamp, Jennifer Vogt-Erickson and Joel Erickson greet Lt. Gov. Tina Smith Thursday as she arrives to speak to local government officials and leaders of the Save Our Hospital organization about Mayo Clinic's decision to move most inpatient services from Albert Lea to Austin. - Sarah Stultz/Albert Lea Tribune

At least 75 people gather at City Hall to welcome Smith

Minnesota Lt. Gov. Tina Smith said Thursday she supports Mayo Clinic Health System pausing its plan to consolidate most inpatient services to Austin so hospital officials and local leaders can find a solution that works for both the community and the health system.

Smith visited with city and county officials, leaders of the Save Our Hospital organization, state Rep. Peggy Bennett and Sen. Dan Sparks in a meeting at City Hall, followed by a meeting with local hospital leaders at the Mayo Clinic Health System in Albert Lea campus. Both meetings were closed to the public and news media.

At least 75 area residents gathered inside and outside City Hall to welcome Smith to Albert Lea and to encourage her to support keeping a full-service hospital in the city.

Mayo officials announced in June it would consolidate its intensive care unit, inpatient surgeries and childbirth center to its Austin campus. The behavioral health center in Austin would move to Albert Lea, while services including primary care, emergency care, laboratory work, outpatient injuries, among others, would remain at both locations.

Since the announcement was made, community members have rallied together to keep a full-service, acute-care hospital in Albert Lea, drawing support from Gov. Mark Dayton, the Minnesota attorney general and most recently AARP leaders. 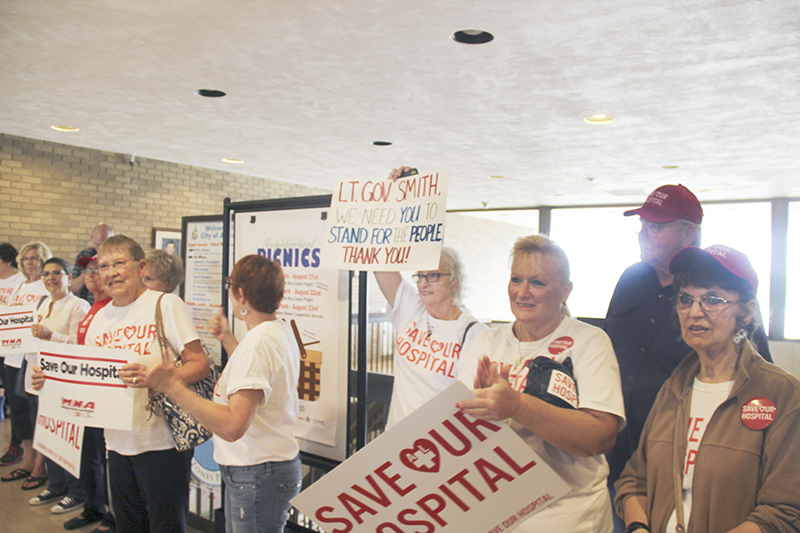 A crowd of at least 75 people gathered to welcome Lt. Gov. Tina Smith to City Hall prior to her meeting with local officials and leaders of the Save Our Hospital organization. – Sarah Stultz/Albert Lea Tribune

Smith said she is concerned to see the reduction in services that Mayo has presented and said she thinks when big decisions like this are made, communities need to be consulted about potential impacts that could take place.

“This hospital is very much at the heart of Albert Lea,” she said. “To lose so many services is a big blow.”

Smith, who is also the chairwoman of the Destination Medical Center Corporation, touched on concerns about the DMC project’s relationship to Albert Lea’s concerns. She said the DMC project is an economic development strategy for Rochester that provides job growth not only for Rochester but the southeastern part of the state. She stated the $585 million in state funding approved for the project is given directly to the city of Rochester for public infrastructure, not to Mayo.

Brad Arends, co-chairman of Save Our Hospital, said he and co-chairwoman Mariah Lynne felt good about the direction the hospital conversation is going, but would feel better when there is a call to action.

He said Save Our Hospital has found other hospitals with the same fingerprint as the Albert Lea hospital that are making money. A delay in implementation of Mayo’s plans would allow time for a forensic health care accountant to put together a business plan based on these hospitals.

“I believe we both feel confident that this is the time and the point when action will be taken with regards to our requests and the needs of the patients in southern Minnesota specifically,” Lynne said.

Albert Lea City Manager Chad Adams said he, too, thought the meeting with Smith was positive and noted that he thought Smith was empathetic to their concerns.

He said the community has a lack of trust with Mayo leaders after how the decision came about.

He said the community built the hospital and it deserves answers.

District 27A Rep. Peggy Bennett, R-Albert Lea, said she was thankful Smith came to the community and thought it was important for her to listen about how the health system’s decision is impacting the community.

Bennett said she also supports having Mayo take a pause with its plan and noted she had previously asked for the same notion. She hoped Smith’s connections could help make this a reality.

Mayo Clinic Health System in Albert Lea and Austin officials said in a statement Thursday afternoon that they were glad to have Smith visit the Albert Lea campus and see firsthand the challenges that the health system — like other rural health providers — are facing and working to solve.

“We are also grateful for the opportunity to show Lt. Gov. Smith the opportunities for growth that exist for the Albert Lea campus, including those offered in our cancer center and behavioral health services,” the statement said. “We appreciate her acknowledgement of our dedicated and compassionate staff members who work hard to meet the needs of the communities where they work and live.” 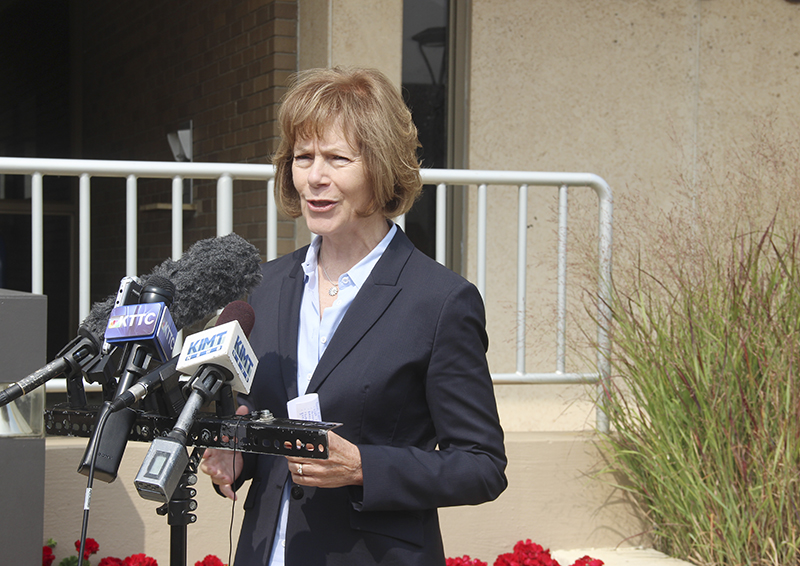 Lt. Gov. Tina Smith summarizes the meeting she took part in Thursday with city and county officials and leaders of the Save Our Hospital organization at City Hall. – Sarah Stultz/Albert Lea Tribune

AARP joins support for the Albert Lea  Save Our Hospital effort

AARP, the nation’s largest nonprofit, nonpartisan organization dedicated to advocating for Americans 50 and older, has thrown its support behind the Save Our Hospital organization aiming to keep a full-service, acute-care hospital in Albert Lea.

“AARP-Minnesota met recently with members of the Save Our Hospital coalition and agree with them that full access to hospital care is critical not only for quality health outcomes but also for the economic vitality of Albert Lea,” said Will Phillips, state director of AARP-Minnesota, and Kent Sovern, state director of AARP-Iowa, in a joint letter addressed to Mayo Board Chairman Samuel DiPiazza, Mayo CEO John Noseworthy and Mayo CAO Jeff Bolton.

The letter to Mayo Clinic leadership came Wednesday on the eve of Minnesota Lt. Gov. Tina Smith’s meeting with city, county and Save Our Hospital leaders in Albert Lea.

“AARP-MN has listened to us and our need to support our seniors who will be greatly affected by Mayo Clinic taking away inpatient and intensive care services,” said Mariah Lynne, co-chairwoman of Save Our Hospital. “They have agreed to support our efforts and we can’t thank them enough.”

Mayo Clinic Health System in Albert Lea officials said Thursday they received the feedback from AARP and have a shared goal of providing high-quality and affordable health care into the future.

“We will continue engaging with the community as we move forward,” the health system stated. 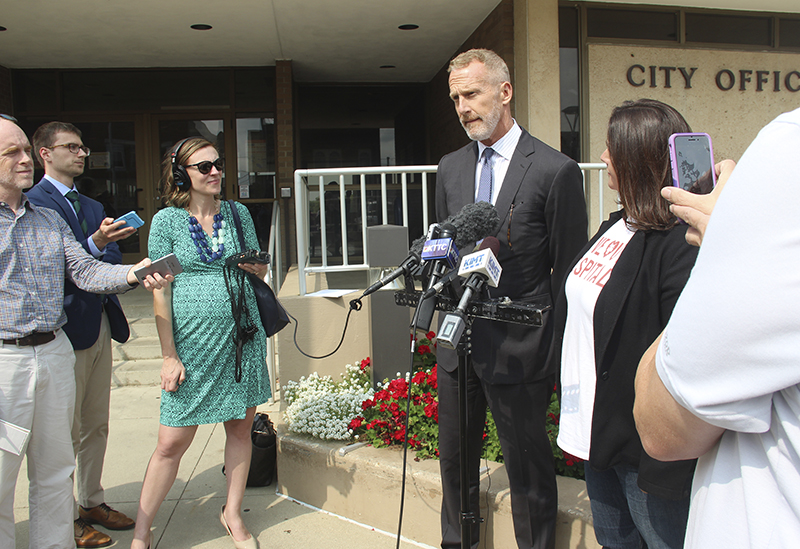 Brad Arends and Mariah Lynne, co-chairs of the Save Our Hospital organization, speak to reporters after the meeting Thursday with Lt. Gov. Tina Smith. – Sarah Stultz/Albert Lea Tribune