Man placed on probation for lighting deck on fire

A man charged after a small deck fire last summer in Albert Lea was placed on probation for up to two years on Thursday in Freeborn County District Court. 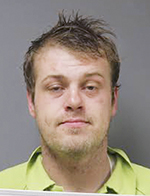 Nathan Elliot Nolan, 33, was sentenced after he pleaded guilty to third-degree arson in February. He was sentenced to 365 days in jail — 336 days were stayed, and he was given credit for 20 days served. Nolan’s conviction was deemed a gross misdemeanor, pursuant to state statutes.

Court documents state Nolan was charged after the Albert Lea Police Department was dispatched the morning of June 13, 2016, to a residence on 11th Street on a report that a male started a fire on a deck and was destroying items in the garage.

Upon arriving, an officer found the west side of the deck was on fire. The fire was later extinguished.

The homeowner said Nolan had been in the house, was agitated, kicked in two doors and caused some damage, court documents state. Nolan was reported as having tried to get car keys from someone in the house and ripping parts out of a vehicle — as though he was trying to hotwire it.

Damage was observed to a vehicle and a house, and a witness saw Nolan pour oil on the deck and assumed he had intended to set the oil on fire.

Nolan was initially charged with two counts of first-degree arson, but those counts were dismissed.

Check forgery and other reports