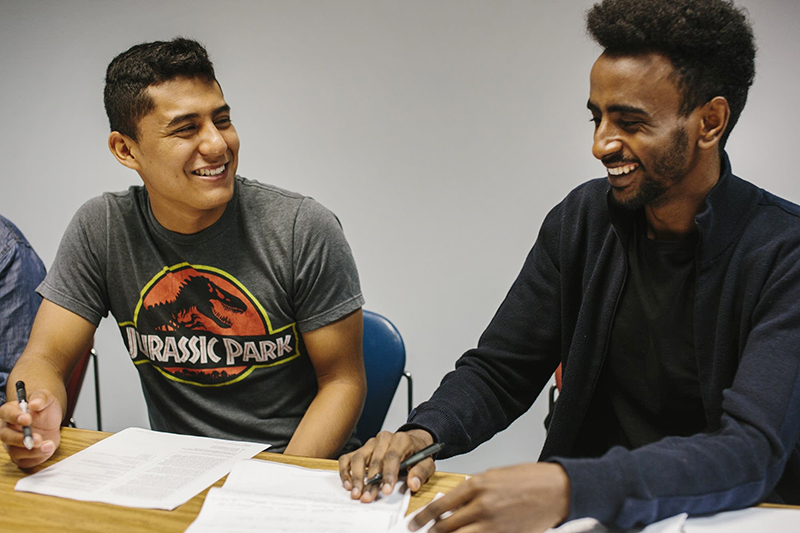 Yossiman Bautista, left, and Ferid Abador work together on test prep during the last week of college preparation for an English language learners class inside Hubbs Center for Lifelong Learning in St. Paul on Tuesday. - Evan Frost/MPR News

State education officials are using an update in federal law to try to tackle one of education’s thorniest problems: how to teach students with limited or no English skills.

Under a draft state plan for evaluating schools, students’ progress learning English will be included alongside test scores, graduation rates and student attendance.

The change is required under the 2015 federal Every Student Succeeds Act. The Minnesota Department of Education will submit its plan for federal approval in September following a 30-day public comment period.

English learners are a growing population in Minnesota schools and make up just over 8 percent of students statewide.

But their wide array of English abilities and educational experiences pose a challenge for school districts.

St. Paul graduate Hay Nay said he benefited from targeted classes for non-English speakers at Washington Technology Magnet School. Nay is from Myanmar, known formerly as Burma, and arrived in the U.S. in 2011 with only a fourth grade education. Because of his age, he was placed in 9th grade at Washington.

“Sometimes I just got confused about what the teacher was saying, and also it’s hard for me to ask questions because I don’t speak English,” Nay said.

Other students have had more formal education and thrive in mixed classes. Yossimar Bautista said learning with native English speakers at Como Park High School helped him because, “we listened to very good English from other people.” Bautista came to the U.S. from Mexico in 2016.

Advocates for English learners hope the new accountability will push schools to invest resources in meeting all those challenges.

But there are some potential problems. One, Watson said most schools want to do things right, but they may lack the money to invest in enough teachers.

“We need to have realistic thinking, and good wholesome American pragmatic thinking. What will it take to accomplish this task?” Watson said.

And two, schools have been here before. The shift to include English progress is the latest in a decade-and-a-half-long quest to measure schools in the right way, in hopes that will improve learning.

“If we focus on quality teaching,” Nyembwe added, “then we may avoid the pitfall of drilling or teaching to the test and will focus on the heart, the art of teaching and being able to see these children blossom and learn.”