A Mankato man who allegedly strangled a woman he is in a relationship with earlier this month is charged with multiple offenses in Freeborn County District Court.

Kirk Corbett Nielsen, 44, is charged with first-degree tampering with a witness, domestic assault by strangulation, false imprisonment and two counts of gross misdemeanor domestic assault. A hearing in the case was Tuesday.

Court documents state Nielsen was charged after Freeborn County dispatchers received a 911 call on Aug. 3 from an address in Freeborn where prior calls regarding violence had occurred. In a second call to dispatchers, the alleged victim stated she was assaulted by Nielsen. 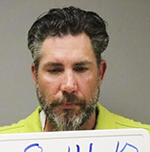 The alleged victim said in court documents Nielsen slammed her head against a stove and strangled her.

Red marks on her neck and a large hematoma above her right ear were reportedly observed. Her right pinky finger was reportedly broken, and she allegedly suffered a number of other injuries.

Nielsen reportedly had a .133 blood alcohol content in a preliminary breath test after the incident.

The alleged victim said Tuesday the injuries did not come from the incident. The alleged assault was a “one night situation,” the alleged victim stated, and she requested Nielsen be allowed to return to their residence and a domestic abuse no-contact order and GPS monitoring requirements be eliminated.

Nielsen, who had posted $30,000 bond and been in custody since his GPS monitoring device was damaged, was ordered by District Court Judge Steven Schwab to have no contact with the alleged victim, possess no alcohol or controlled substances and follow other conditions. The domestic abuse no-contact order was ordered to remain in place.

Nielsen was convicted of misdemeanor domestic assault in December 2008.

First-degree tampering with a witness carries a maximum sentence of five years in prison and a $10,000 fine.