Robert “Bob” K. Stillings, 84, died Friday, Aug. 11, 2017, at Lakewood Memorial Hospital in Staples. Funeral services for Robert “Bob” K. Stillings will be at 2 p.m. Saturday at Bonnerup Funeral Service, 2210 E. Main St. in Albert Lea. The Rev. Jeff Phelps will officiate. Visitation will be for two hours prior to the service. Interment will be in Graceland Cemetery in Albert Lea. 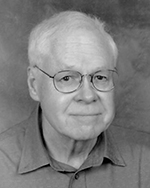 Robert Kay Stillings was born March 3, 1933, to parents Lloyd P. and Margaret (Mahoney) Stillings in Valley City, North Dakota. He moved to Iowa as a teenager and graduated from high school in Clinton, Iowa. He moved to Albert Lea, where he met and married Dorothy Mae Oakland on Aug. 11, 1952.

They lived in their current home for over 50 years and raised their four children there. He worked for the telephone company in town for 43 years.

Bob was a prankster, jokester, an incredible handy man and a collector of history. That’s how a lot of people would describe him, but those who knew and loved him would describe him as a naughty leprechaun with a twinkle in his eye and a mischievous streak, too. He was a hard worker, built and flew model aircraft, hunted and fished and enjoyed woodworking. Bob was a gunsmith and passed down his knowledge of guns to his grandsons. He also taught gun safety for over 30 years.