Running on all cylinders 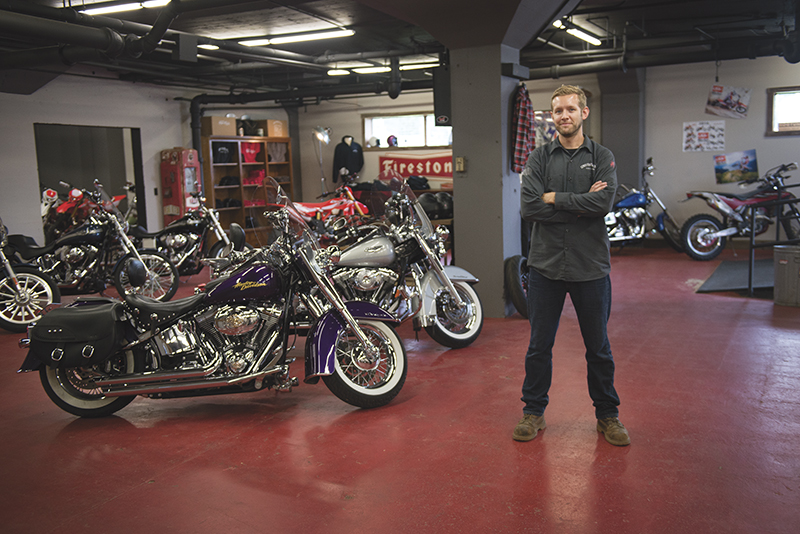 Man starts his own motorcycle business and finds success

Mike Owens, owner and operator of Lewis Charles Cycles in Albert Lea, said that starting his own independent business was always something he wanted to do — there was no obvious answer to when, where or how.

“I think we decided on this town because we liked the big, small-town feel — so we liked that,” Owens said.

He attributed his initial interest in motorcycles to his father because, from an early age, Owen saw his dad’s passion for bikes.

“It has always been a passion and a hobby — if you have any free time that is what you do,” Owens said.

His interest in bikes soon transitioned into a career path when Owens decided to attend a school that specializes in strict motorcycle mechanics: Motorcycle Mechanics Institute in Phoenix. Owens graduated in 2004.

After school, Owens moved back to Minnesota.

Owens spent about seven years in Duluth working at a Harley-Davidson dealership as a technician. He attributed his heightened mechanics skills to working with the right people at Harley-Davidson Sports Center in Duluth. 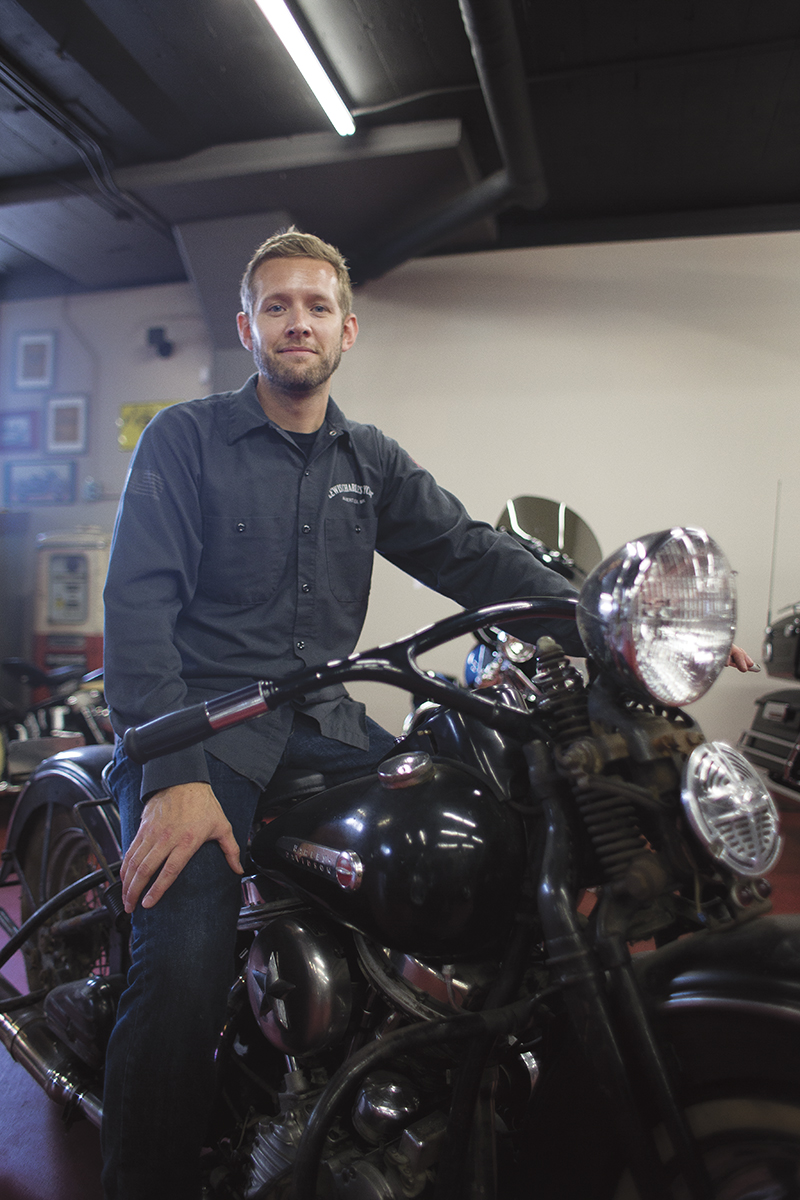 “It was a great dealership to work for, and I kind of got into my field more and more that way,” he said.

Owens and his wife eventually ended up in Rochester for about five years.

“We kind of wanted to finally settle down because we were just floating around, just different education, different things took us everywhere,” he said. “We ended up (in Albert Lea), which has been awesome.”

Owens worked at Bergdale Harley-Davidson in Albert Lea for five years, so he said he was comfortable in town and familiar with the people.

Being from Lake Crystal, a small town outside of Mankato, Owens laughed and said Albert Lea was the perfect location to be close to his and his wife’s families — without being too close.

Owens wanted to continue his love for the industry, but get more involvement with customers. Owens left the Harley-Davidson dealership in Albert Lea and started Lewis Charles Cycles in the spring of 2015.

Early on in his adventure with Lewis Charles Cycles, Owens was a one-man-show. While balancing the retail, shop and sales of his business solo, Owens decided he needed help in order to grow.

“I was doing everything and basically staying up at night working on stuff because, if someone comes in, you have to set your tools down — so it just didn’t work,” Owens said.

One year into his new business venture, Owens hired friend and fellow motorsport enthusiast, Dustin Rafdal, whom he had met working at Bergdale Harley-Davidson in Albert Lea. 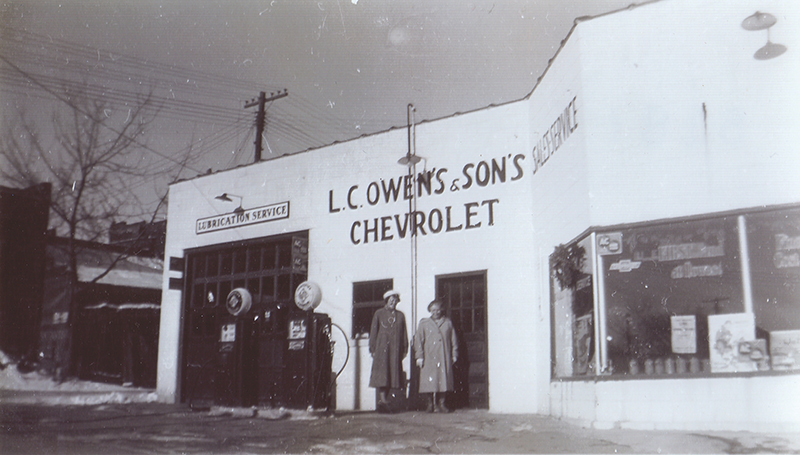 The name of the business came from Mike Owens’ great-grandfather, Lewis Charles Owens, who had a Chevrolet dealership in Lake Crystal in the early 1930s. – Provided

Rafdal spent 18 years at the dealership in Albert Lea before joining Owens and Lewis Charles Cycles on the other side of town.

“It has been super stressful but totally worth it — I wouldn’t go back to anything else,” Owens said.

Owens said the strong motorcycle culture in and around Albert Lea has contributed to the success of his business. He and Rafdal attend local motorcycle events and put on motorcycle shows whenever possible. He said attending events and associating his business with different riding groups, such as the American Legion Riders, has helped promote and create a recognizable face for the business in the Albert Lea community.

He attributed years of experience, quality work and products, loyal clientele, customer service and investments in the ever-changing motorsports industry to the growth he has seen in his business.

“Word has kind of gotten out and (the clients we have had so far) have been a big part of getting us to be bigger and bigger,” Owens said. “We kind of started with just people in Albert Lea and we have been slowly gaining people from surrounding areas — now people are coming from all over southern Minnesota. Word of mouth has been huge.”

Lewis Charles Cycles is named after Owens’ great-grandfather, Lewis Charles Owens, who had a Chevrolet dealership in Lake Crystal in the early 1930s.

“An example of metric would be Yamaha and Honda — it is Japanese basically, but it is easier to say metric because we get some from England. Metric is basically everything except for U.S. cycles,” Owens said.

V-twin bikes are generally categorized as American bikes, including Harley-Davidson and Indian brands.

Owens said he and Rafdal are confident working on any type of motorized bike.

Owens said Lewis Charles Cycles recently started working on dirt bikes, which has widened their abilities, as well as exposed the business to new engineering.

Because of the constant changes in the motorized industry, Owens must adapt to keep his education and knowledge of motorcycles up to date. He said the internet has become somewhat of a “game-changer” in terms of staying up to date when a question arises.

“We have been exposed to the changes in the industry, and we are on top of it,” Owens said. “We’ve got all the software to keep that going and getting better.”

As far as inventory goes, Lewis Charles Cycles is always changing. Because the business is not limited by brand or style or engineering, wildcards are a common sight in Owens’ showroom.

“It is constantly changing — we are getting into buying and selling and doing that side of it, so every bike I have is something I am going to hopefully sell,” Owens said. As far as bikes that have become permanent fixtures in his shop, Owens has a 1948 Panhead and a 1946 Knucklehead — both of which are old, classic and vintage Harley-Davidson bikes.

“Those are never going to leave — those will always be here,” Owens said.

Down the line, Owens hopes to grow his existing business by getting more people in the door and offering more products and services. 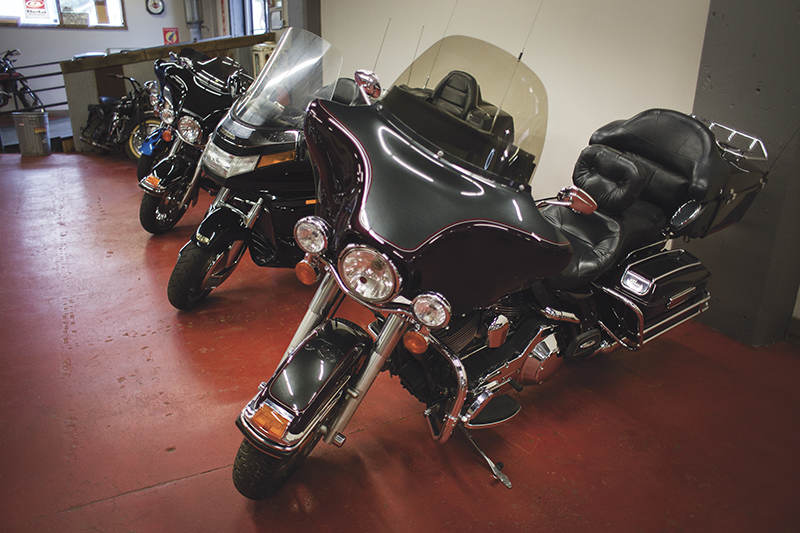 “Honestly, I see us playing with cars and hotrods a little bit, too,” he said. “I’d like to do that a little bit more and see where that goes. Anything that puts a smile on our faces, we think, ‘let’s try that and let’s try that.’ And now dirt bikes, too, I mean, that is a whole ’nother crowd that I am totally getting into. Yesterday, Dusty and I went dirt biking and I haven’t done that in forever — and I can barely walk today, but man it was fun. It really opens up doors.”

Most of Lewis Charles Cycles’ inventory comes from trade-ins and auctions, though the business has recently started consignment sales — where a customer asks the business to sell their bike for them. Owens said consignment sales offer a unique service to customers because it helps them get into a bike that is more appropriate for their wants and needs.

He said he utilizes every avenue out there to look for deals and make things work for his customers.

“Once it gets rolling, bikes just show up,” he said. “People come here now and say, ‘hey, I am looking to get rid of this, what can you do for me?’ It has been a constant flow of inventory and (the cycles) come and go quick.”

Owens has turned his passion for motorcycles into a livelihood — using an open mind, his friends, his wife and Albert Lea as a vehicle for his success.

“The freedom — you get on a bike and you’re like, ‘OK, the world is gone,’ and you can just go ride,” he said. “I want to keep that industry going and do our part in getting the right bikes for people and fixing bikes the way that people want them and at the level of quality that we can fix them.”