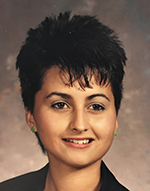 Sara had a wonderful sense of humor. Her passions were fishing, hunting, cooking, crocheting, embroidery and traveling. She was fortunate to have travelled to most of the United States and Mexico. She loved animals and always had a lot of cats. In her lifetime she has had dogs, cats, a hermit crab and even an iguana.

Graveside services for Sara are pending.