Since I-35W collapse, state has more eyes and sharper focus on bridges 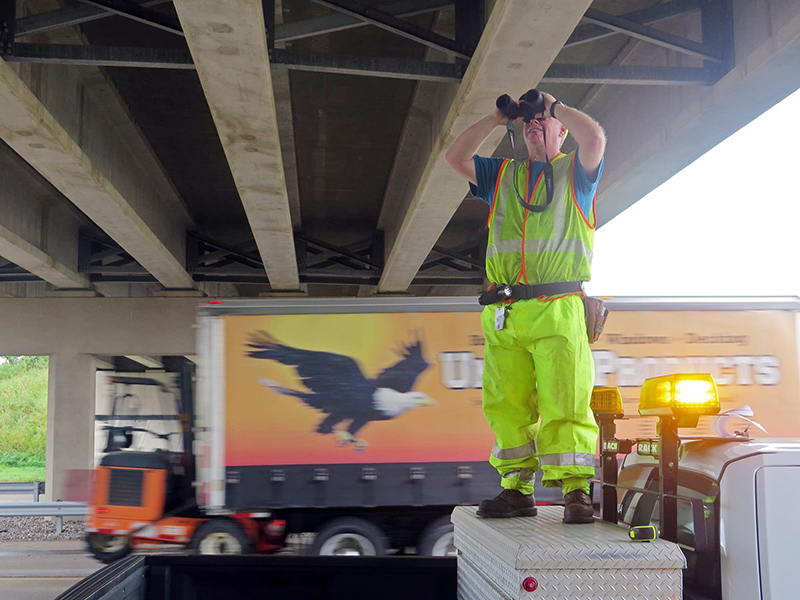 Brad Dumbeck, a MnDOT bridge inspector, gets a close look a bridge over Highway 610 in Brooklyn Park. - Brian Bakst/MPR News

Built in 1961 and carrying some 23,000 cars a day, the Blatnik Bridge in Duluth has experienced ample wear and tear.

Last year, nearly two dozen of Blatnik’s connector plates and a pivotal floor beam were repaired or replaced after a 2014 inspection revealed cracks that had only been temporarily fixed. The plate work was part of a $2.8 million refurbishment, with more work planned on the steel truss bridge in the years to come.

“If anything is discovered that poses imminent danger to the public, the bridge would be closed immediately for repair,” the Minnesota Department of Transportation assured in an update.

Annual inspection reports for the state’s second-longest bridge read like a diary of defects — some minor, some more concerning — that makes Blatnik a fixture on the state’s fix-up list. It’s among a shrinking roster of “fracture-critical” bridges in the state, which are those built without redundancies that could make them susceptible to collapse if a key component fails.

These bridges generated public unease in the wake of the Interstate 35W bridge disaster in Minneapolis, which killed 13 and injured 145, when that fracture-critical bridge broke apart during rush hour on Aug. 1, 2007. In the years since, MnDOT has worked to rebuild the state’s most vulnerable bridges, and to rebuild confidence that it is keeping close tabs on bridge health.

Ed Lutgen, the inspection program manager at MnDOT, said the I-35W tragedy stuck with him and others in the department. That’s evident by the orange hardhat that he wears in the field, bearing decals with a 35W logo.

“Every August I remember the day and the memories come back to me,” said Lutgen, who was on scene after the collapse as investigators searched for the cause. “I look at that every day, and as I’m out doing some of these inspections to make sure the lessons learned from that event can really be carried forward to that next generation of engineers and inspectors.”

Chris Ramberg, an inspection coordinator, was among those hired after the collapse.

“The inspection program was well-delivered to the guys coming in,” he said. “They did a nice job passing on their knowledge of what went on to us guys who started after it.”

On a rainy morning a couple weeks back, Ramberg and veteran inspector Brad Dumbeck were lined up for inspections of a series of overpass bridges along Highway 610 in Brooklyn Park.

Traffic whizzed by at 65 mph when Dumbeck exited the truck parked with flashing lights atop the cab.

He was dressed top to bottom in reflective yellow and lugged lots of gear — on a belt, in his pockets and draped across his neck. He had gauges for measuring cracks, markers to label problem spots, a digital camera and a clipboard for documenting various components, two flashlights and a pair of binoculars to see into each nook and cranny.

Dumbeck started with a rolling wheel — picture a unicycle without the seat — that he used to measure the length and width of the bridge and its components. That was to make sure it matches design specifications.

“Without that, I’d be dragging the tape measure out a lot,” he said. “It helps.”

He ran his hand along hairline cracks in a concrete abutment. It means there are moisture issues, but none that are alarming to him. A bit later, Dumbeck paused to jot down notes, but he was still taking stock of things.

Many bridges, like this one, are deemed “cookie-cutter” bridges — highway overpasses that are pretty straightforward and can get a thorough inspection in a matter of hours. Others are problematic because they soar high over water or have dated designs.

Lutgen said inspections on bridges like the Blatnik can take up to three weeks to complete.

“As you find elements that have concern, then it takes quite a bit longer to document the condition,” he said.

After the I-35W tragedy, MnDOT said it increased staff (about 90 of its employees are now certified to do inspections), it boosted training for inspectors, and it improved the equipment they use. The department added six “snooper” trucks with extendable buckets to give crews better access. It also turned to drone technology in some instances.

Inspection reports related to the fracture-critical bridges now get an independent structural engineering review. Lutgen said inspectors now all carry a 180-page guidebook with technical specifications and pictures of bridges in various conditions to bring more consistency to the reviews.

“This is like the Bible to all inspectors,” he said.

Before, there was a single determination of whether a state was doing them timely and properly. Now, there are nearly two dozen risked-based metrics — and being unsatisfactory on any of them requires a fix within 45 days or a corrective action plan.

The agency said all states are currently in at least conditional compliance.

About $6 billion in federal aid per year goes to bridge improvements.

Retired bridge consultant Andy Herrmann, the past president of the American Society of Civil Engineers, testified before Congress about bridge issues in the wake of the I-35W collapse. “Unfortunately, sometimes it takes a bridge failure to point out possible deficiencies in a bridge,” he said in a recent interview.

The I-35W incident sent inspectors nationwide scurrying to check the width of gusset plates, which connect beams on bridges. Those on I-35W were determined to be too thin and were pegged as the main culprit in the collapse.

“The public should be pretty reassured as they are driving across bridges, because we have the bridge inspection program across the United States. Every bridge is looked at, at least once every two years,” Herrmann said. “And if they find something, the bridge inspector or engineer has several choices: they can close the bridge immediately, or they can load post it, or they can do emergency repairs.”

MnDOT has been sensitive to what inspectors encounter, and it has moved to refurbish or replace bridges with severe defects.

The year after the collapse, state legislators overrode a veto by then-Gov. Tim Pawlenty to raise transportation taxes and plow significant new money into road and bridge upkeep.

Since then, about 120 bridges have been retrofitted or replaced. Another 18 will be by next summer, according to agency plans.

One third of Minnesota’s nearly 100 fracture-critical bridges have limits on the weight of vehicles that can cross over them. Five have been closed altogether.

Back at the Hampshire Ave. bridge over 610, Dumbeck proclaimed it on course to “easily” pass inspection. He’s been doing this job for about 17 years and figures he examines 150 to 170 bridges every year.

He said he reviews the condition of a lot of bridges built in the 1950s — and some nearing the century mark. They’ve got bearings that are frozen or need other upkeep. He passes on what he sees to maintenance crews.

“For a bridge to last that many years, it was built right and it’s been cared for tremendously,” Dumbeck said over the zooming noise of a semitrailer going by. “And sometimes, they just get tired.”