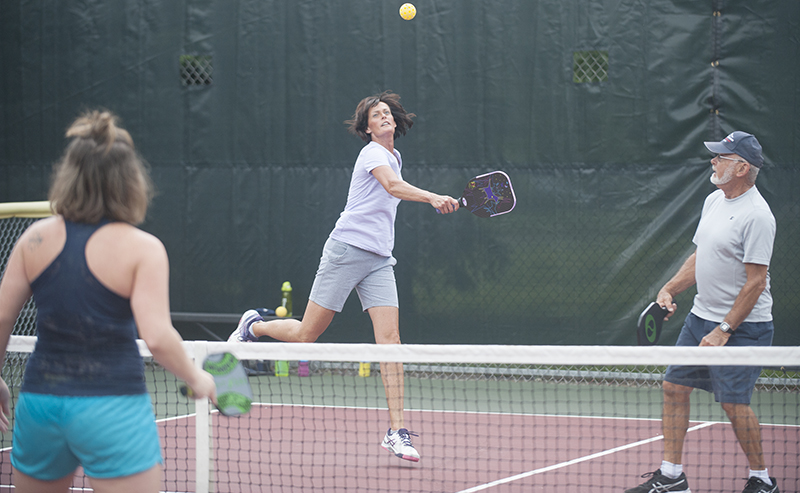 Members of the Albert Lea Area Pickleball Club joined together Monday night for a few competitive matches. The club is practicing for the annual Summer Sizzler Tournament that it is hosting over the weekend. - Tyler Julson/Albert Lea Tribune.

The Albert Lea Area Pickleball Club gears up this week as it gets ready to host the annual Summer Sizzler Tournament. The tournament will consist of around 80 competitors coming from all over the Midwest to face off in pickleball action.

The tournament runs Saturday through Sunday, with men’s and women’s doubles starting at 9 a.m. Saturday and mixed play beginning at 10:30 a.m. Sunday. 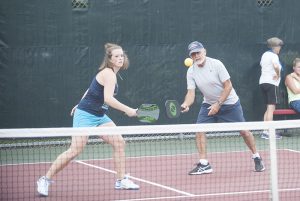 Members of the Albert Lea Area Pickleball Club hit a ball back across the net Monday night during the club’s meeting. The club meets at 5 p.m. on Mondays, Tuesdays and Thursdays at the pickleball facility. – Tyler Julson/Albert Lea Tribune.

The Summer Sizzler is sponsored by a host of Albert Lea businesses and individuals, including RiverStyx who is also donating a new paddle to be raffled off at the tournament.

The Albert Lea Area Pickleball Club currently has over 100 members who come together almost daily to take part in pickleball games.

The club’s president, Terry Adams, talked about why he thinks so many people are attracted to the sport of pickleball.

“It’s a fun game to play,” Adams said. “It’s a smaller court so you don’t have to run very far. Due to the closeness of it, it’s more of a social thing, you can talk with each other. I think sociability is a big aspect of it. You can play with women, you can play with men, against all ages and still have fun playing it.”

The pickleball area is open to the public and is located to the southeast of the Albert Lea Aquatic Center. There are six pickleball courts and one tennis court located at the facility.

The club meets there many days of the week for practice and a fun time. The club meets at 5 p.m. Mondays, Tuesdays and Thursdays at the courts, there’s also a group that plays every morning around 7:30 a.m. Anyone is welcome to come and join the club members, whether young or old, boy or girl, new or experienced, they encourage everyone to come and partake in the fun.