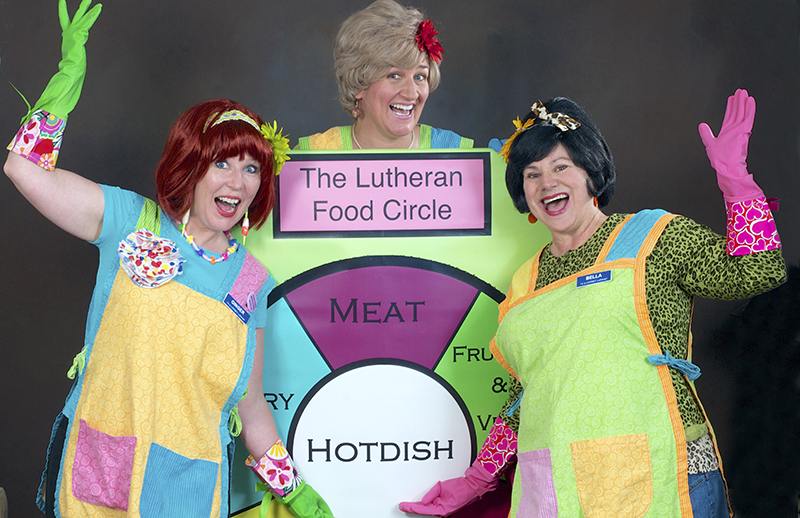 The Looney Lutherans are a trio of wacky girls on tour promoting their new cookbook. - Provided

Wacky trio slated to have 2 shows at Marion Ross Center

The “Looney Lutherans” will make their way to the Marion Ross Performing Arts Center this weekend for performances that are sure to hit home for many Midwesterners.

The group is a trio of wacky gals on tour promoting their new cookbook and Lutheran lifestyle guide, entitled “Use Your Food: A guide to healthy living inside and out — from our kitchen to yours, eat like a Lutheran!”

Performances include a variety of segments on healthy living, including discussion of the Lutheran food wheel, in which all roads eventually lead to a hotdish. Attendees can expect to get a lesson on exercising like a Lutheran with simple household and pantry items.

There will be two performances this coming weekend — the first is slated for 7:30 p.m. Saturday, and the second will be at 3 p.m. Sunday. The shows are expected to last about 90 minutes.

All material in “Looney Lutherans” is original, family-friendly and interactive.

Creator and cast member Greta Grosch said the production was born out of a church basement in 2006. She had the idea and invited ladies from her latest church production to help her get it started.

Since 2006, Grosch and six other actresses have toured nine states with “40 pounds of comedy” — since the group has to fly to many performances, Grosch said their stage, set, costumes and props must all fit in a suitcase.

Each show has only three actresses involved. Grosch will play Lois, Dorian Chalmers will play Ginger and Tina North will play the role of Bella.

The minimalist show is packed full of music and comedy, and with some help from the audience, these gals share some age-old wisdom for living a long and healthy life the Lutheran way.

Although each show is a little different, Grosch said the Albert Lea performances will follow a central theme titled, “Livin’ La Vida Lutheran.”

“Some of the stuff we have been doing from the beginning — and it still works,” Grosch said. “The charm hasn’t changed although the material has.”

Attendees of this weekend’s performances can expect to hear songs such as “The Menopause Medley” and “Hotdish for Husbands.” The songs are what Grosch called “evolutions” within the performances.

“We spend a lot of time in the car traveling together, and so we are always creating new stuff,” Grosch said.

The group of women has performed in everything from small venues and county fairs to large stages in big cities. Grosch said the group of ladies is able to cater and adapt each performance to the venue, atmosphere and audience.

The cost of tickets is $15 for adults and $10 for students. Tickets are available at the Albert Lea Convention and Visitors Bureau.

Cost: $15 for adults and $10 for students; tickets are available at the Albert Lea Convention and Visitors Bureau