William Hubert Hood, 78, was born April 21, 1939, in Humboldt, Iowa, the son of Hubert and Margaret (Schiltz) Hood. He was confirmed in the Catholic church. Bill graduated from Humboldt High School in 1957 and from St. John’s University in Collegeville  in 1961. That fall, he went to Washington, D.C., where he studied at Georgetown University, majoring in Russian studies — which included the Russian language, history and culture.

In 1968, taking a break from his studies, he went to Idaho State University in Pocatello, Idaho, where he accepted a teaching position in Russian and intellectual history. Bill taught at Idaho State for five years while also continuing to work on his PhD. 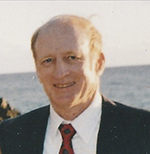 Bill was an excellent teacher and enjoyed teaching. However, he decided he did not want an academic career. He really wanted to go into business.

In 1974, Bill returned to Humboldt, where he worked with his brother, Bob, in their family grocery business. On June 14, 1977, Bill married Rose Mahannah, who he met while teaching at Idaho State University. They lived in Spirit Lake, Idaho, until 1983, when they moved to Emmett, Idaho. In Emmett, Bill and his brother-in-law, Ken Runyan, bought and managed a Coast-to-Coast Hardware Store.

In 1999, Bill, Rose and Melanie moved to Albert Lea. Bill continued as an active and long distance manager in the hardware business in Emmett for the next 16 years. During part of that time he served on the Board of Directors for the True Value Hardware Corporation.

He was a longtime member of the Catholic church in Albert Lea.

Bill is survived by his wife, Rose, of Albert Lea; his daughter, Melanie (Dallas) Weitzel, of Emmett; his brothers Mike Hood of Minneapolis and Bob (Mary) Hood of Ankeny, Iowa; his sister, Mary (Bill) Kuntz, of Northfield; plus several cousins, nieces and nephews.

Friends may visit with family from 5 to 7 p.m. Tuesday at Bonnerup Funeral Service in Albert Lea.

In lieu of flowers, memorials are suggested to the charity of the donor’s choice.