Women from opposite ends of the U.S. teach their practice in Albert Lea 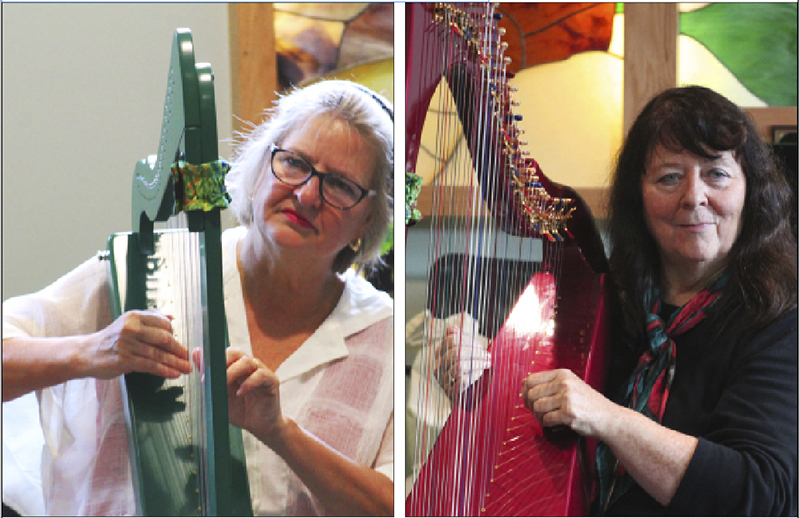 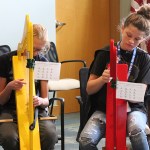 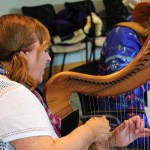 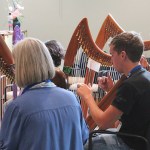 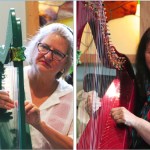 About a dozen musicians gathered at Thorne Crest Senior Living Community on Aug. 10 to expand their knowledge of an underestimated instrument.

“I have been a harp player for most of my life, but for the last 10 years, I have been affiliated with the International Harp Therapy program,” Rachel Christensen of Albert Lea said. She said something she has been wanting to do for many years was bring teaching professionals in the therapeutic music field to the area.

Harp therapy is not a new idea, Christensen said. She first had the idea to use harp in a therapeutic way when her father was in the hospital with dementia and Parkinson’s disease at the end of his life. As a lifelong harp player, Christensen brought her harp to play for her father and her family as they visited him.

“He wasn’t speaking anymore and it was his birthday, so the family was around just having a little get-together,” Christensen said. “I had a little harp with me and I was playing songs and I started playing ‘Jesus Loves Me’ — and he sang along — and he hadn’t spoken for a long time, but he could remember those words and he could sing along and it was amazing.”

Christensen said that moment was what she believed to be a miracle. From that moment, she wanted to learn how to help people outside of her family find comfort in music.

Since therapeutic music has not been heavily explored in a role coupled with medicine, there is not a black and white answer for the human quandaries that can benefit from harp therapy. However, harp therapy has been known to help comfort patients in hospice units, people with anxiety and depression, terminal illnesses and cancers, those in pain and those without control of their muscles. Since the beginning of the harp therapy program, teachers have also seen the music bring comfort to children with autism and other special needs, such as selective muteness, in order to teach them with a different approach. Christensen said she has also worked with animals who are struggling with pain, sickness or temperament issues. The organizers said harp therapy can also help release emotional pain, improve short-term memory and attention span, increase social interaction, build self-esteem and relieve stress.

The teachers with the International Harp Therapy program were careful to clarify that therapeutic music is different than music therapy.

Music therapy is a practice where a therapist uses music as an avenue to reach their patients, while therapeutic music is a practice where the music itself is doing the comforting to patients. For example, a music therapist would use a statistical model of prompts for a patient to complete using music in order to identify their strengths and weaknesses. A therapeutic musician uses the elements of music to balance energy — and they let the music itself do the work.

It was Christensen’s efforts that brought the International Harp Therapy program teaching sessions to Albert Lea. As a harp teacher, sponsor for the course and an advocate for therapeutic music, she hopes to see therapeutic music more heavily intertwined with medicine.

The class in Albert Lea consisted of two sessions, each a few days long. The first session was called a skills workshop and it was a beginners course in playing the harp. Those enrolled in the first session ranged from professional harp players to students who first touched a harp last week.

“I have some young people (enrolled), I have some beginners, I have some people that are fairly proficient, I have people from around the country and a number of local people, too,” Christensen said.

“Some of us are just building our skills,” Christensen said. Some people enrolled were interested in learning to play the harp while others were enrolled to take their harp-playing to the level of therapeutic music. The second session was organized in order to help more proficient harp players become certified therapeutic harp practitioners.

CTHPs are accredited practitioners in hospitals and hospice units across the country and worldwide that specialize in bringing comfort to people through the harp. Those who complete the International Harp Therapy program are able to become certified once graduated.

The International Harp Therapy program has about 400 graduates across the world, and there are currently about 75 students enrolled in the program that started in 1994.

“So it is pretty unusual to have this many harp players in one room,” Christensen said with a smile. She said she learned the harp in school in Sioux Falls, South Dakota, when she was younger, although harp is no longer a common instrument taught in schools.

“I guess what we’re hoping to accomplish (with the classes) is that we will have people learn more about the instrument, what you can do with it and then take it to the next level of wanting to be a therapeutic musician,” Christensen said.

The second session of musicians who attended the harp therapy sessions were much more advanced in their ability to connect music to patients in hospice or hospitals. Christensen said instead of focussing on the harp as an instrument, the second session focuses on energy work — meaning that students of the program were learning how to perform one-on-one therapy sessions for those suffering. The harp players are able to use music, sound and vibration to bring positive results to patients. Other than attending sessions with other harp players, homework, reading and hours of practice are required of the International Harp Therapy program certification.

“Music has this pathway that is different than our normal thinking,” Christensen said. “Have you ever heard a song that you really liked — and (the song) brings back thoughts like ‘I was wearing this dress,’ and ‘I was with that person’ and ‘the air was really fragrant.’” Christensen explained those thoughts as the limbic system working in the human brain. She called the limbic system a whole different way to access the brain and memories.

“Music can do that for people — people who are in pain, often times they find the music very soothing. There is an element of distraction but for a lot of people it is more than that,” Christensen said.

“There is a science, a history and evidence to back up all the techniques and information,” Christensen said.

Christina Tourin, of San Diego, California, is the director and original designer of the International Harp Therapy program. Tourin is in her 23rd year as a teacher and mentor of therapeutic music.

“The program basically started when my dad was in the hospital, and I knew I wanted to do music therapy,” Tourin said. “And I wasn’t able to go to school for music therapy school at the time because I had two little boys at the time. So I was given a vision one day that I was to start this program — and it has grown ever since.”

Tourin called the harp a special instrument and said people are gravitating towards it.

“Some people think it is because King David played it for Saul — other people look at the science behind it and see that it is one of the purest sounding instruments,” Tourin said. She explained that when musicians look at an oscilloscope, or a picture of the sound, harp overtones appear differently and more simply than other instruments. She said pianos and guitars have high overtones while harps and lyres have more neutral and pure tones.

Early on in her journey with founding the International Harp Therapy program, Tourin said she wanted to create a more interactive therapy than just playing music for the suffering.

When she moved to San Diego in 2000, Tourin said she worked in a hospice facility that sometimes had eight people die a day.

“It was a lot of work, just being there, playing for people but more than that, I liked taking the harp into rehab and getting the people to play the harp,” Tourin said. “If someone had had a stroke or something like that, if they could just play one string, they would be part of a bigger cycle.”

Tourin has turned her attention towards working with children and at children’s hospitals.

“The joy of music making, and the research of where music is stored in the brain is coming to light,” Tourin said. “(Researchers) are finding that children learn better when they access that part of the brain with music. They find that people with Alzheimer’s can recognize a song and sing along, but they can also recognize their loved ones because there is a synopsis of the neurons jumping back and forth in their brains — that is really special for people that are dealing dementia and Alzheimer’s.”

One woman in the class, Sharon Dowie, traveled from Edmonton, Alberta, in Canada in order to attend the skills session in Albert Lea last week.

Although she is a student in the International Harp Therapy program, Dowie works as a music teacher in Canada, and works with children with special needs. Five years ago, she started playing the harp. She developed a special connection with the harp which led her to the International Harp Therapy program. She sought a way to tie her work with music and special needs children to the harp and that is why she joined the program.

Recently, Dowie had an experience where members of her school’s administration asked her to work with an autistic child for some private sessions. She said the child had multiple different kinds of therapists working with him for two years when she started working with him in June. The other types of therapists did not have any success getting the boy to make any sort of physical contact, hand-to-hand contact, or even make contact with toys in the room.

Dowie said that in her first session with the boy, she played the harp for him and he watched with intent. She said this was a big breakthrough with the child because they made eye-contact, which was previously uncommon with the student.

“Secondly, he let me take his hand — and he let me pull his hand through the strings,” Dowie said. “And then, the biggest thing is, he independently went and did it lots of times by himself.”

Dowie said that she recognized how rewarding her field of work along with her knowledge of the harp was at that moment.

“You know you are on to something special when you see that — his mother was in tears and everybody was so emotional,” Dowie said. She said that even though this interaction with the student was short-lived, it was a start.

“Basically what it is, is that the vibrations in the strings — they charge every cell in your body. And so he felt something different, that he had never felt before,” Dowie said. “The other thing is, autistic children are very sensitive to sound so when I tried to engage his with some of the other instruments like a drum — it was too loud for him — whereas the harp is mellow enough that it doesn’t put him off-kilter with the sound.”

Alden students Isabelle Thostenson and her best friend Bryn Evans joined the skills session portion of the program to learn the basics of the harp to see if they liked it. Neither of the girls knew how to play the harp before they were enrolled.

“It is harder than I thought it would be — it takes a lot of practice,” Evans said.

Evans and Thostenson see themselves continuing to play the harp long-term.

“It is relaxing and it has a lot of benefits — there is a lot you can give as well as receive from this,” Thostenson said.

Woman gets probation after DWI crash with her child…