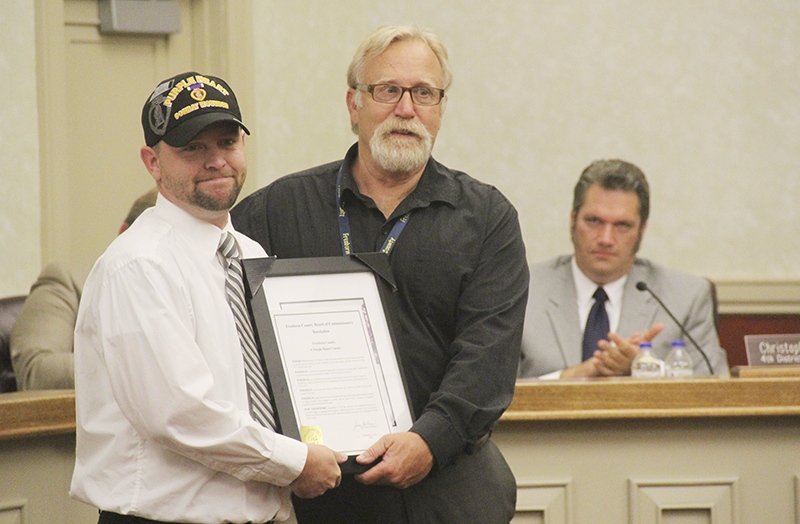 Freeborn County is the first Purple Heart County in Minnesota

In October 1950, Paul Overgaard was injured after being shot in his left thigh north of Pyongyang, North Korea, while serving as a paratrooper in the U.S. Army during the Korean War.

As a result of the incident, he was awarded the Purple Heart and returned to battle after a six-week stay on a military ship.

On Tuesday, the Freeborn County Board of Commissioners recognized the efforts Overgaard and 25 other Purple Heart recipients in Freeborn County have made while serving the United States.

The board recognized Freeborn County as a Purple Heart County. A half dozen signs recognizing the county’s designation will be placed near roads where they enter the county.

Iraq War veteran and Purple Heart recipient Ryan Sabinish said the idea to recognize Freeborn County as a Purple Heart County was introduced by American Legion Riders in Albert Lea. The idea was later brought to Freeborn County commissioners Mike Lee and Chris Shoff, who both supported the measure, Sabinish said. The county was proclaimed a Purple Heart County Sept. 11 — the first such designation in the state, which came on the 16th anniversary of the Sept. 11, 2001, terrorist attacks.

Sabinish, who was a .50-cal gunner in a Humvee, was injured by shrapnel during the war on March 23, 2007, resulting in severe blood loss and a concussion. He stayed on base for up to a couple of weeks before returning to his mission, even before he regained feeling in his hand. 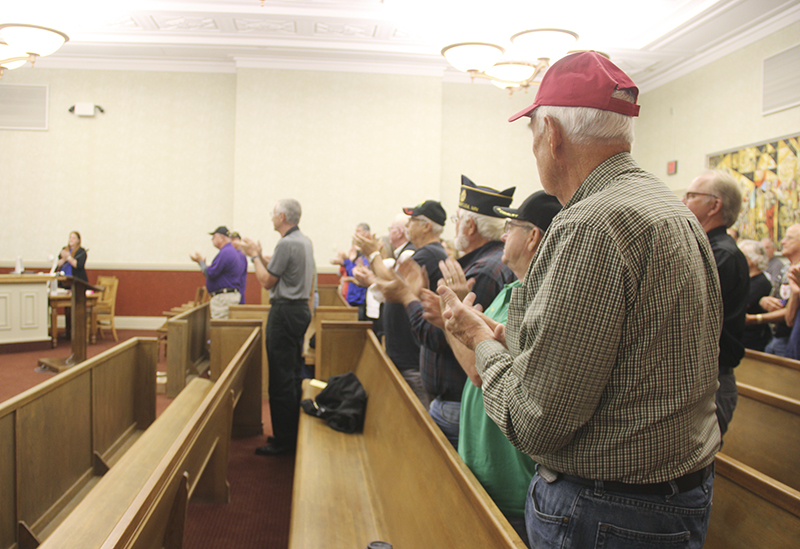 The crowd at the Freeborn County Board of Commissioners meeting on Tuesday gave a standing ovation to Freeborn County becoming the first Purple Heart County in the state. – Sarah Stultz/Albert Lea Tribune

Overgaard, who served in Korea from September 1950 to May 1951, was a paratrooper in the 187th Airborne Division. An infantry platoon leader, Overgaard participated in two combat jumps behind enemy lines and was shot the second day after the first jump took place, resulting in shrapnel wounds.

On his 21st birthday, when his unit was heavily engaged with a large Chinese Army unit, the former state representative’s commander was severely wounded and lost an arm and a leg. Overgaard essentially led the operation until it ended the following day. He was awarded the Silver Star for his effort.

Overgaard spoke highly of how the community he served treated him after his stint in the Army.

“I’m happy to see the positive response of people,” he said. “I’ve had a very good response from people for my service. Unfortunately, that isn’t true for Vietnam veterans, who were victims of a lot of hostility when they returned. I’ve never had anyone denigrate my service. This is a welcoming community. Veterans are treated well here.”

Freeborn County Attorney David Walker was a prosecutor in the Army, assigned to the 10th Mountain Light Industry Division in Fort Drum, New York. He was briefly deployed in the United States during the Desert Storm conflict to work on legal issues relating to deployed soldiers.

“I think it’s an excellent idea,” Walker said of Freeborn County being recognized as a Purple Heart County. “I think that when you can provide support to the veterans who have sacrificed so much for the country, it’s an excellent idea. They deserve it, and I appreciate it, and I appreciate their sacrifices. I know what it meant to my father many years ago.”

Walker’s father, Charles Walker, served in the Army during World War II and the Korean War. Charles Walker received a Bronze Star and a Purple Heart after being shot during battle during the Korean War. According to a newspaper article, despite his injury, he continued with the mission until it was finished. Charles Walker died in 2012 at the age of 87. David Walker and his father both have dedicated bricks at the veterans memorial near the Freeborn County Government Center.

After the board voted to recognize the county as a Purple Heart County, board chairman and Vietnam War veteran Jim Nelson thanked veterans for their service.

“These gentlemen are the reason that we can meet like this any day we want to, and thank you,” he said. 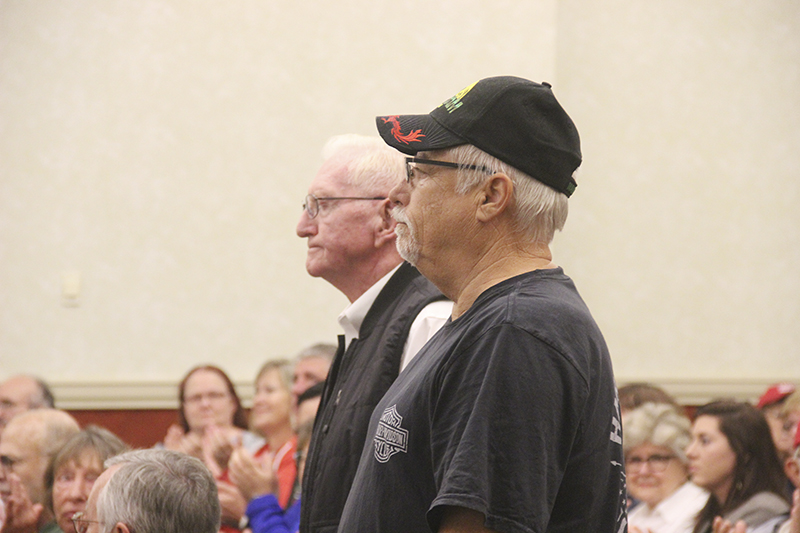 Purple Heart recipients were asked to stand and be recognized during the Freeborn County Board of Commissioners meeting Tuesday morning. – Sarah Stultz/Albert Lea Tribune