An Albert Lea man who allegedly strangled a woman he knew last weekend was charged with a felony on Monday in Freeborn County District Court. 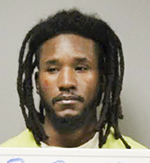 Court documents state Burnette was charged after Albert Lea police officers were dispatched to an address before 9 p.m. Friday regarding a possible domestic situation. After arriving on scene, officers reportedly concluded there was an assault-in-progress inside the residence and forced entry.

When asked what happened that evening, Burnette allegedly said he did not want to incriminate himself and refused further comment before saying the fight was about money and food and they were both trying to get jobs.

Burnette was reportedly taken into custody but refused to walk to the squad car, saying he did not consent to the arrest and would not cooperate. Court documents state after being reasoned with, Burnette again refused to get in the vehicle and tried to kick at an officer.

Once he was taken to jail, Burnette refused to leave the squad car, was placed in a restraint chair and allegedly threatened to find out where officers lived and find them on the street.

The alleged victim reportedly had a head injury and stated the injury came from Burnette. She stated he punched her in the side of her head and strangled her twice, causing her to have a hard time breathing.

Marks were reportedly visible on the alleged victim’s neck.

Burnette’s next court appearance is scheduled for Sept. 21. Domestic assault by strangulation carries a maximum sentence of three years in prison and a $5,000 fine.