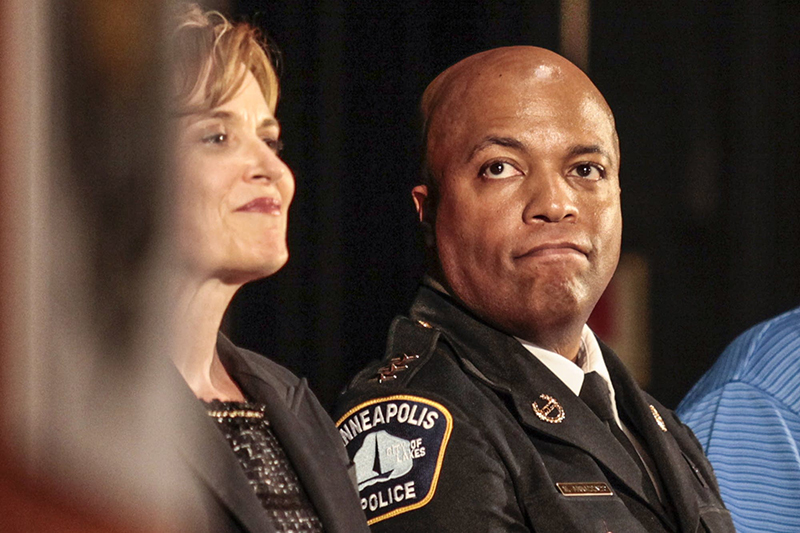 The 53rd police chief of Minneapolis raised his right hand on Friday and swore an oath to uphold the laws of the city, state and nation.

In a ceremony that featured dance, song and prayer, Medaria Arradondo, 50, became the first black chief in the city’s 150-year history.

After his daughter Nyasia pinned on his badge while his son Medaria Jr. looked on, Arradondo acknowledged the support and guidance he’s received from members of his community as well as his parents, who were in the audience at the Sabathani Community Center. He said his parents taught him to value service to others and to have humility.

“And above all else, never drink from that cup of poison, of hate,” Arradondo said. “To just love. And so, I’m a true reflection of them. So, mother and father, thank you so much.”

While the audience applauded, the normally even-keeled Arradondo appeared to tear up.

During his speech, Arradondo reiterated his goal of restoring public trust in the department. The 28-year veteran of the force is taking the helm of the department in the wake of a fatal police shooting in July which has rattled public confidence. 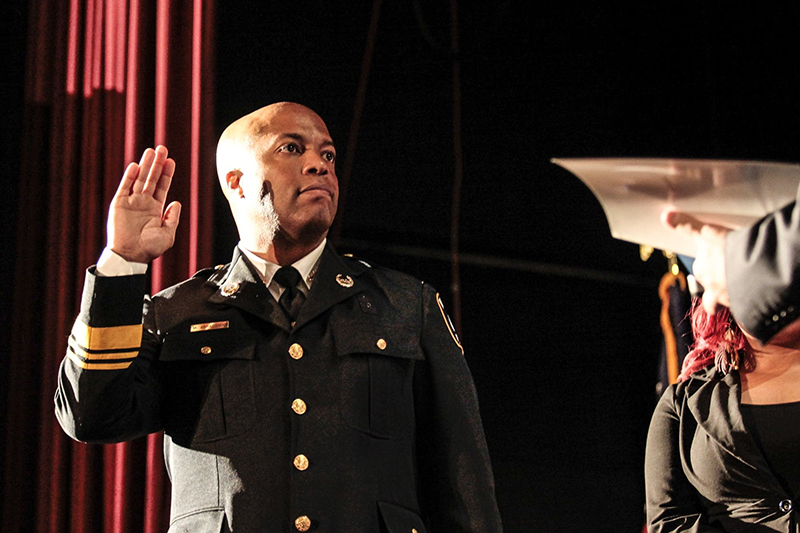 Arradondo said it’s crucial that members of the community believe in the officers that serve them.

“I need my department members to be truthful in their words and actions,” Arradondo said. “For a peace officer to be untruthful, it is like a boat with a hole in it. It renders us useless and no one with any common sense would sit upon the waters with you.”

Mayor Betsy Hodges acknowledged that one of the reasons she chose Arradondo to lead the department is because of his connections to the community. The swearing-in ceremony was held not far from where he grew up.

“It is so fitting that we are in this historic place of community today, to make yet more history by installing as police chief someone who is from this community and of this community,” Hodges said.

In her speech, Hodges dropped some names of noteworthy African Americans who came from the same neighborhood, like Hennepin County court judges LaJune Lange and Pamela Alexander, journalist Michele Norris, Gary Hines, director of Sounds of Blackness, and Hodges’ husband, Gary Cunningham, to name a few.

Arradondo’s appointment was approved by the City Council last month. He was already formally sworn in during a private City Hall ceremony.