Bernice Bertha “Bea” Slette, 95, of Walters died Thursday, Sept. 14, 2017, at The Shepherd’s Inn in Wells. A memorial service will be at 2 p.m. Monday at United Lutheran Church in Walters with the Rev. Don Rose officiating. Visitation will be one hour prior to the service at the church. Interment will be at Walters Cemetery. Bruss-Heitner Funeral Home in Wells is assisting the family. To leave an online condolence, visit www.brussheitner.com. 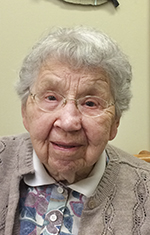 Bernice was born June 13, 1922, in Foster Township, Faribault County, the daughter of Arno and Margaret (Obermeyer) Buendorf. Bea graduated from Wells High School, and then went on to beauty school in St. Paul.

She was united in marriage to Palmer Slette on Nov. 10, 1943, in Wells. Bernice was not only a housewife, but a farm helper.

She was a clerk at Walters Post Office. Bea was an active member of United Lutheran Church, where she enjoyed serving on the altar guild and was a member of WELCA.