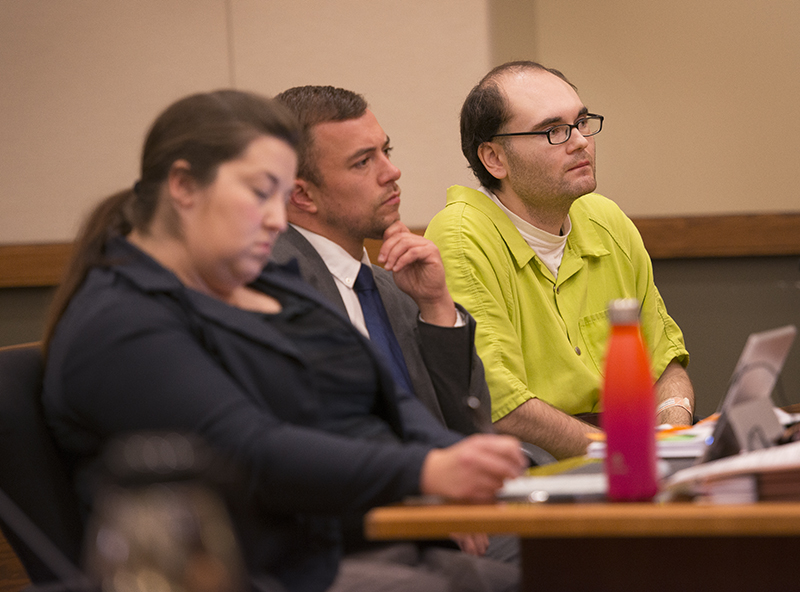 The man who shot and killed a rural Freeborn County man last year at Myre-Big Island State Park was sentenced to more than 25 years in prison on Friday in Freeborn County District Court.

David Michael Easter, 27, will serve at least 17 years of that sentence in prison, with 8 1/2 years on supervised release, pending good behavior. He received credit for 186 days served and was ordered to pay more than $5,000 in restitution.

Easter was convicted of second-degree murder in April in connection with the shooting death of Spencer Daniel Brown, 23, on Aug. 23, 2016, at the state park. Easter claimed self-defense in the shooting death. Friday’s sentencing hearing lasted about six hours.

In issuing the sentence, District Court Judge Steven Schwab said the murder appeared to be an “execution.” He called the case “disturbing” and “tragic” and rejected Public Defender Michael Ryan’s request that Easter either receive a lesser prison sentence or be placed on probation, due to the facts of the case and findings made in the pre-sentence investigation that Easter lacked remorse, was not being cooperative or truthful in the pre-sentencing process and would not be amenable to probation.

Prior to sentencing, Easter said he has remorse for his actions.

“I’m not proud,” he said. “I do have remorse.” He proclaimed his faith in Jesus Christ and declined further comment, saying he did not want his words “twisted.”

Dotti Honsey of the Freeborn County Crime Victims Crisis Center read victim impact statements written by more than a half dozen of Brown’s family members, who discussed the hardship his murder has caused the family.

Brown’s mother, Denise Brown, said she struggles not to cry and to accept the death of her son in her statement.

“Spencer will never get to create memories,” her statement said.

“You have made me part of a stigma,” Denise Brown’s statement said. “Because of you, I am the mother of a murdered child.” She scolded Easter for saying the family would never understand the shooting death immediately following his conviction.

She said she worried her son begged for his life before he was shot and stated Easter had shown no accountability or remorse for his actions.

“The hole inside me will remain forever,” her statement said, referring to the void she feels after her son’s death.

In arguing that Easter should receive a lesser sentence, Ryan cited Easter’s lack of criminal history, his amenability to probation and the facts of the case. He said the shooting death was not calculated.

Freeborn County Attorney David Walker said Easter was not compliant with the pre-sentence investigation and lied on a number of topics, such as his claims that he was a high school graduate, his current marriage to Karla Easter is his first and other subjects.

Walker described Easter as a “convicted murderer,” with convictions for underage drinking and driving in 2007 and for obstructing a police officer in 2010.

“He’s not a good candidate for probation,” Walker said.

Ryan said after initially refusing to participate in all parts of the investigation, Easter followed the requirements. The perception in the pre-sentence investigation that Easter lacked remorse for the shooting death was incorrect, because of the situation Easter was in, Ryan said, who noted his belief Easter’s claims of self-defense were genuine.

Easter turned himself in following the shooting, when he could have left the scene and kept the case unsolved, Ryan said. Brown was at least a partial aggressor in the events that led to his death, he said.

“This does not smack of a cold-blooded killing,” he said.

Walker said Brown was shot twice in a locked car that was in reverse while he was unarmed and not looking at Easter, adding his belief that there was no evidence Brown had a role to play in his own death.

Brown’s sister, Marisa Brown, said words could not express the pain the family is facing from the his death.

“We take comfort in thinking Spencer is waiting for us in God’s kingdom,” she said in her statement.

Taylor Hogan, the fiancee of one of Brown’s brothers, directly addressed Easter in her statement, saying he had not apologized for causing Brown’’s death.

“Why take a life and show no remorse?” she said.

Brown’s sister, Emma Brown, said in her statement the family was “afraid for our lives” when Easter traveled to Omaha, Nebraska, while he was released before the trial. She expressed regret for the shooting death of her brother.

“I, as David’s wife, want him home,” she said, and added she did not want to lose her husband or have to explain to their daughter, Madison, that her father was in prison to protect the family.

She described her husband as her “rock.”

Neal and Lisa Gjersvik — parents of Lily Gjersvik, Spencer Brown’s ex-girlfriend — discussed  mental health issues they have faced since Brown’s shooting death and read journal entries written since his death. Brown stayed at the Gjersvik family home the summer he was killed.

Neal Gjersvik read a poem written by John Denver, as well as journal entries he has made since Brown’s death. He discussed the decline in his mental health since the shooting death.

“No one can know this feeling without living it,” Neal Gjersvik said, who asked Schwab to sentence Easter to “the longest possible sentence.”

Lisa Gjersvik said her family has traveled less often since Brown’s shooting death. She asked Schwab to sentence Brown to more than 30 years in prison.

“Spencer was a sweet, kind-hearted, beautiful young man,” she said.

Lisa Gjersvik said Easter was a danger to society.

“The world is a safer place with David Easter behind bars,” she said. “He’s a menace to society.”

After sentencing, Brown’s friends and family said they supported the ruling.

“It is an appropriate sentence” he said.

Neal Gjersvik said the legal process regarding the case was tough, but should limit the chance of the success of any possible appeal.

“We love Spencer, and we know that David Easter executed Spencer,” he said. “But then it’s just being that victim to the court system that was really so hard, and we understand that now.

“And the courts, they did a really good job of making sure David Easter got every opportunity to defend himself. And he was found guilty and he was given that high sentence, so we feel very fortunate, very fortunate that we live where this is done so well.”

Spencer Brown’s uncle, Rob Sorensen, said he was pleased with the sentence.

“I’m just glad that he got what he deserved,” he said. “I think he deserved more. He took his life and shouldn’t have. At least I think he got a fair sentence. At least we can walk out of here feeling good. He’s going to serve a lot of time.”

Denise Brown said she was satisfied with the sentence.

“I think it’s a fair sentence,” she said. “Right now, I am satisfied with it.” 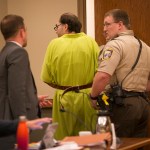 David Easter looks to the courtroom gallery where his wife, Karla, sits as he’s led out after being sentenced to more than 25 years in prison for the second-degree murder of Spencer Brown. – Colleen Harrison/Albert Lea Tribune 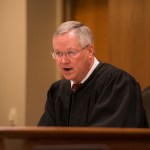 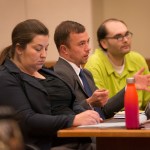 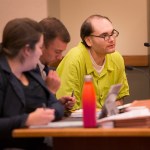 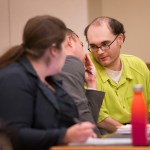 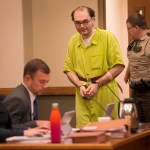 David Easter is led into the courtroom during his sentencing Friday for the second-degree murder of Spencer Brown. Brown was fatally shot twice in the head last summer at Myre-Big Island State Park. – Colleen Harrison/Albert Lea Tribune 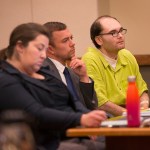