Arrangements are with Daniel Funeral Home in Sartell. 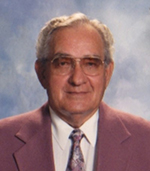 Francis B. Crawford was born Oct. 7, 1929, to J. Seth and Bessie Crawford in Beaver Creek. He grew up on the family farm west of Beaver Creek. After graduation from Beaver Creek High School, he attended Macalaster College in St. Paul and later transferred to the University of Minnesota in Minneapolis. He graduated in June 1954 with a degree in pharmacy.

On March 22, 1953, Francis was united in marriage to JoAnn Lowe. After he graduated from college they moved to Albert Lea, where he worked at Rexall Drug Store. In the early 1970s Francis served a term as mayor and later served on many boards. Francis was a grateful and faithful member of AA for 44 years.

Francis and JoAnn traveled to Arizona for 35 winters. They moved to St. Cloud in 1993 and on Jan. 1, 2017, they moved to assisted living in Country Manor in Sartell.

Francis passed away at Quiet Oaks Hospice House on Thursday, July 13, 2017, after a seven-year battle with bladder cancer and other health issues.

Francis is survived by his wife, JoAnn, of 64 years of marriage; daughter, Julie Wiseman, of St. Cloud and her children Anthony (Emily) of Houston and Beth Wiseman of St. Cloud; his son, Francis Jr. (Josie), and their children Seth, Kalli, Sofia and Josie Rose of St. Cloud; sisters-in-law Eleanor, Marlys and Orla; brother-in-law, George Lowe; and many special nieces and nephews.

His family would like to extend a special thank you to Quiet Oaks Hospice House and the CentraCare staff.

Memorials are preferred to Quiet Oaks Hospice House or a charity of the donor’s choice.