Helping others enjoy a favorite pastime 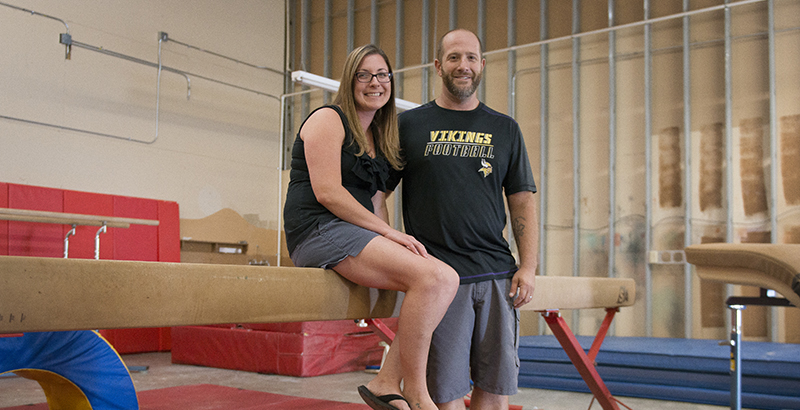 Nicole LaFrance, pictured with her husband, Darin, is opening a gym for the Albert Lea Gymnastics Club. Lessons are scheduled to start in November. - Colleen Harrison/Albert Lea Tribune

Young gymnasts in Albert Lea will soon have a place to develop their skills in a welcoming environment.

The first classes at Albert Lea Gymnastics Club are scheduled to begin the week of Nov. 6. Registration begins next week and will be available online, and an open house is planned before the facility opens. The club will accept children who range in age from toddlers to high schoolers. Students will be put in age groups, evaluated and placed into skill levels.

Owner Nicole LaFrance has experience in gymnastics. She taught a tumbling program at The Meraki Studios. She said she received positive feedback about bringing a gymnastics club to the community and expects most students to be at a beginning skill level. Voluntary, in-house competitions are planned next spring, and she hopes to compete with other gyms next year.

“A lot of people just stop me, talk to me, random phone calls, things like that,” LaFrance said, who described gymnastics as “her favorite pastime” while she was growing up. Having a local gymnastics club eliminates the need to take children dozens of miles for gymnastics courses, she said, including her daughter, Laina, 6.

LaFrance hopes the club at 2610 Y.H. Hanson Ave., that includes men’s equipment, will expand to a larger space next year.

“We have a complete gymnastics gym,” she said. “We are in a smaller space at this time. I do have a full-size spring floor, but we’ll be able to put up maybe about three-fourths of that.”

LaFrance hopes an organized cheerleading team will be featured at community functions and will also compete with other organizations.

Albert Lea Gymnastics Club will provide activities when outside activities are not possible, LaFrance said, who noted she is reaching out to businesses for donations so each student who wants to participate can join the gymnastics club.

LaFrance thanked community partners for helping her open the club.

“It’s taken a big group of people to help make this possible,” she said, noting the difficulty she faced in finding a building to house the gymnastics club.

LaFrance hopes students learn new skills, build confidence and determination and believe in themselves. She plans to highlight a couple of children each week on Albert Lea Gymnastic Club’s Facebook page.

“It could just be from helping a friend to accomplishing a roundoff back handspring, to whatever it may be, but it’s supporting each other and rooting each other on, because a lot of this takes a lot of work and practice to do something … it’s just a lot of being there for each other,” she said.

For participants, working hard, having determination and self-control, and being aware of their bodies and minds are important, LaFrance said, who described herself as a cheerleader for children.

“I get really excited for them, and they love every minute of it, so it’s fun,” she said. “We put on fun music, and we bounce around, and we have a good time. It’s not where you are judging somebody because they can’t do something. It’s a pretty warm environment.” 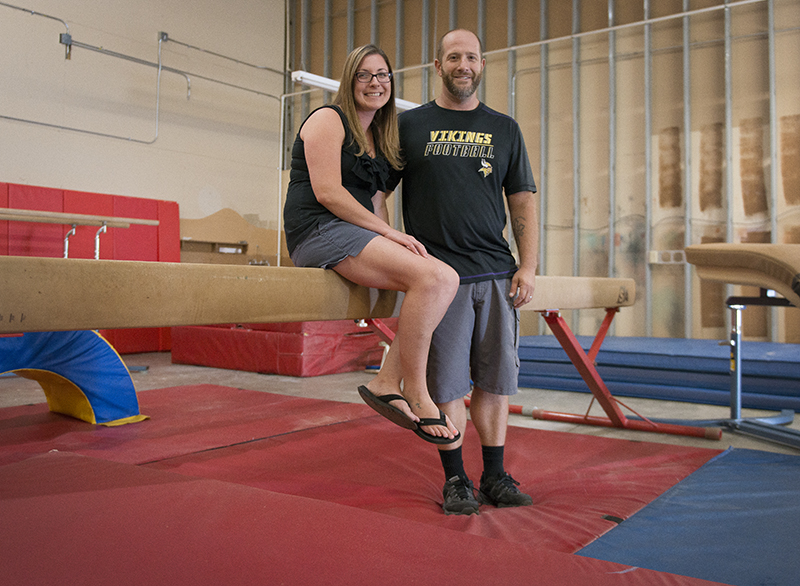 Nicole LaFrance, pictured with her husband, Darin, is opening a gym for the Albert Lea Gymnastics Club. Lessons are scheduled to start in November. – Colleen Harrison/Albert Lea Tribune