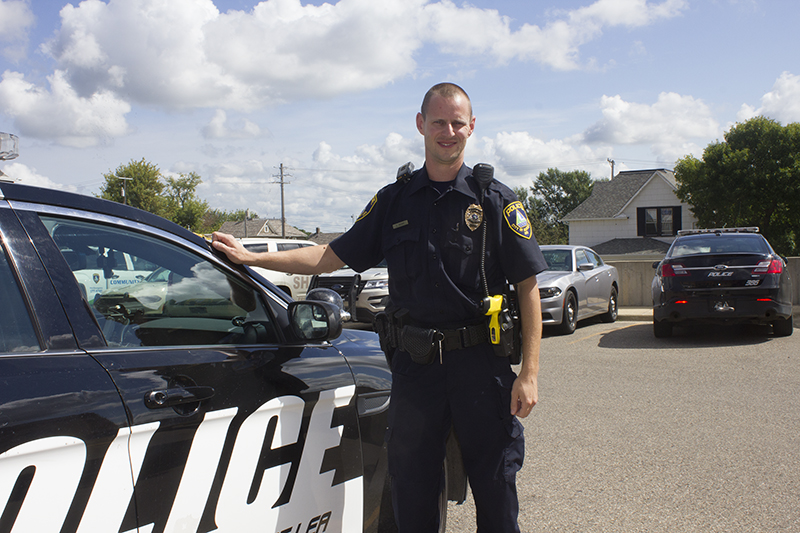 A new officer for the Albert Lea Police Department has followed his father and grandfather into a life of service.

Christopher Diesen started his career in Albert Lea on July 5. He was sworn into the position during the Aug. 28 Albert Lea City Council meeting.

Diesen, 40, was a longtime mechanic for Nissan, and he was a community service officer and park police officer for Three Rivers Park District in the Twin Cities area. Diesen earned his two-year degree in law enforcement from Normandale Community College, and received his bachelor’s degree in December from Metro State University.

Diesen was drawn to the law enforcement profession for selfless reasons.

Though law enforcement agencies are facing difficulty with public perception in communities across the country, Diesen said he was still drawn to the profession.

“Public perception’s not always the truth,” he said. “That didn’t affect (my decision) at all. It’s something that I always wanted to do. I think right now we need good officers more than ever to try to change the public’s perception.”

As a new officer, Diesen hopes to uphold the law.

“I really believe that the laws that we have are why society works,” he said. “It keeps order, and I want to be part of the system that makes America what it is.”

To Diesen, being impartial and developing relationships with people are parts of being a police officer.

“You have to always remember that maybe this person is making poor choices right now, but they’re still a person,” he said.

A part-time officer with Kenyon Police Department, Diesen recalled helping a man who was in town waiting for a court appearance to receive welfare benefits.

“You have to remember that the people you are dealing with are people,” he said.

Diesen spoke highly of the people he serves in Albert Lea.

“It seems to be a pretty decent public to deal with,” he said. “Obviously there’s exceptions in every town — there’s going to be. You’ll have people who don’t like you — that’s everywhere. I really like Albert Lea. I think it’s a beautiful city. There’s a lot of very, very good qualities.”