Leaders blast security guard who made up shooting story 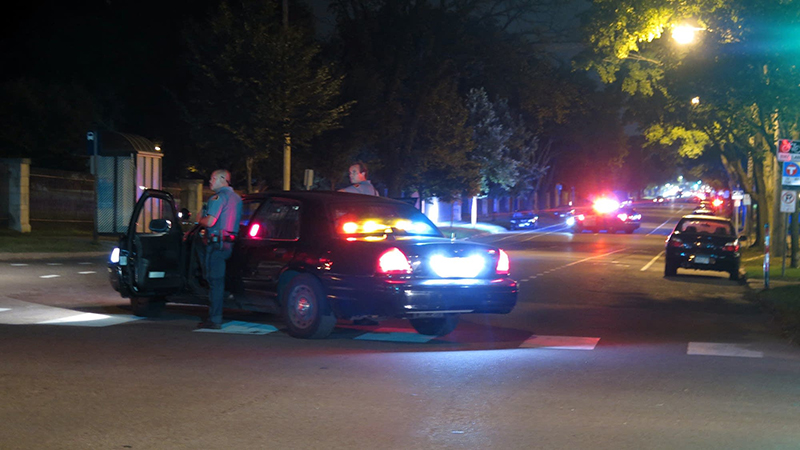 Officers search for a shooting suspect near St. Catherine University, but it turns out such a person never existed. - Tim Nelson/MPR News file

African-American community leaders on Friday admonished the actions of security guard Brent Ahlers, who earlier this week accidentally shot himself in the shoulder and then made up a story of an intruder.

The key detail: Police scanner traffic suggests Ahlers described the nonexistent suspect as a “black male” with a blue sweatshirt, black jeans and a “short Afro.”

This description of the phantom shooter was repeated over police radio, and people who heard it spread the description through social media.

“This was a hideous crime by this man,” said Tyrone Terrill, president of the African American Leadership Council. “He could have got an African-American male hurt or worse.”

Community leaders said at a Friday news conference that Ahlers’ false accusation was insulting to young black men, and it put their lives at risk as dozens of police hunted Tuesday night for a non-existent criminal.

“Because he said he was shot, the St. Paul PD is actually looking for a perpetrator who shot somebody, who has a gun,” Terrill said. “You have a campus that was locked down. You have a community locked down behind his crime.”

On the night of the shooting, police department spokesman Mike Ernster refused to confirm the description was reliable.

“There was descriptions of suspects that were coming out across the police radios. None of that information has been vetted or verified yet,” Ernster said. “We’re not prepared to give out suspect descriptions at this point, until we are very sure of what was described on that radio is accurate.”

“What happened over these past few days perpetuates a dangerous stereotype and echoes our country’s tragic and continuing history of racism. No one can ever afford to rest in the pursuit of justice and fairness in our society.”

Before Ahlers admitted to police that he made up the intruder story, a manhunt brought more than 50 officers and a State Patrol aircraft to St. Paul’s Highland Park neighborhood.

Ahlers, of St. Louis Park, has been fired and is charged with falsely reporting a crime, which is a misdemeanor.

Community activist Robert McClain said he has heard from two black teens and an African-American man in his 30s who were near the St. Paul school and were questioned and released. McClain said officers approached the teens with guns drawn.

“The fact that they were stopped based on erroneous information was not a good experience for them,” McClain said. “Because the officers who were at high alert were looking for an active shooter and they were not going to put their lives in jeopardy by stopping and asking nice questions.”

The St. Paul Police Department does not deny that some people were stopped and questioned. But the department says no officers submitted any written reports about such contacts.

The Rev. Charles Gill, of the St. Paul Black Interdenominational Ministerial Alliance, demanded that the university accept responsibility for Ahler’s actions and apologize soon to a number of people.

“Not only to our chief of police, Todd Axtell, and the other law enforcement agencies that did the search, but also (to) the local community and African-American men and young men that live in the St. Paul area,” Gill said.

St. Catherine University officials say Ahlers had worked for the school for a little more than a year. He was not supposed to be carrying a firearm.