Loretta Delores Brandt, 99, of Minnesota Lake, died Wednesday, Sept. 27, 2017, at Parkview Care Center. Funeral services will be at 11 a.m. today at St.Paul’s United Church of Christ in rural Minnesota Lake. The Rev. Cherie Daniel will officiate. Visitation will be from 9 to 11 a.m. today, prior to the service at the church. Interment will be at St. Paul’s United Church of Christ Cemetery. Bruss-Heitner Funeral Home in Wells is assisting the family. To leave an online condolence, visit www.brussheitner.com. 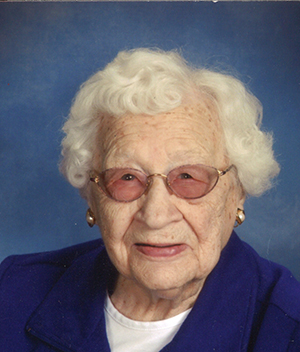 Loretta Delores was born on a farm May 14, 1918, in Hayward, the daughter of Fred and Emma (Schweiger) Brandt. She lived there for 13 years along with her 10 siblings, namely five brothers and five sisters. She was baptized and confirmed at St. John’s Lutheran Church in Austin. She later moved to Manchester and Freeborn. Loretta and her sister, Edna, moved to Wells together, and cleaned houses and worked at Mallons.

On Feb. 12, 1942, she was united in marriage to Erich Brandt at St. Paul’s United Church of Christ in Minnesota Lake Township, where she remained a faithful member. Erich and Loretta were both coincidentally Brandts, but were not related prior to their marriage. Erich and Loretta were blessed with three children, Reva, Rhonda and Randy. Loretta was not only a housewife, but taught Sunday school and attended church. She was also a quilter, sewer and crafter. Loretta worked seasonal jobs at the Del Monte canning factory. She enjoyed going old-time dancing with her husband, Erich. She was an avid cardplayer, up to her last days. Loretta had played in many tournaments, but so loved passing the time with all of her family members while playing cards.

She is preceded in death by her husband, Erich; five brothers, Leonard, Walter, Helmer, Edmond and Ray; five sisters, Bertha, Audrey, Elva, Edna and LaVonna; and son-in-law, James Prange, in 2007.