Funeral services for Louise J. Johnson, 97, of Albert Lea will be at 11 a.m. Wednesday at Three Links Care Center in Northfield. The Rev. Clark Cary will officiate. Burial will be in Hartland Cemetery Wednesday afternoon. 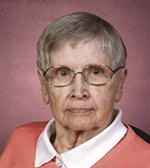 Louise Janet Johnson was born Dec. 20, 1919, in Tracy, the daughter of Juel and Mabel (Olson) Kopperud. Louise attended grade school in Hartland and graduated from Freeborn High School in 1937. Following graduation she was employed as the Freeborn school secretary.

Louise and Donald Johnson were married March 2, 1942. The first three years of marriage included long separations while Donald served in the Army during World War II. Upon his return they began to farm near Hartland. Together they raised two children, Steven and Mary.  Louise excelled as a fine cook and continually searched for new recipes to try. For many years, Louise enjoyed singing in the church choir and was often requested as a soloist for weddings.

After 20 years of sharing work on a family farm, Louise and Donald moved to Albert Lea. Louise was employed by Albert Lea public schools as secretary to the athletic director and the audio-visual director. In her retirement she spent countless hours researching family genealogy and has left a wealth of information for her descendants. Through the years Louise was active in her church, participated in women’s groups, taught Sunday school and Bible school and worked in the church library. She was a loving and devoted mother and grandmother. Louise lived for five years at Good Samaritan Society of Albert Lea and in January 2016, she moved to Three Links Care Center in Northfield.

She was preceded in death by her husband, Donald; her parents Juel and Mabel Kopperud;  stepmother, Irene Kopperud; sister and brother-in-law Elaine and Walter Johnson; half-brother, Gary Kopperud; and sisters-in-law and their husbands Charlotte and Alton Rice and Helen and Marshall Bendixen.