An Austin man who allegedly led law enforcement in Steele and Freeborn counties on a high-speed chase that reached 110 mph last weekend was charged with two felonies Tuesday in Steele County District Court. 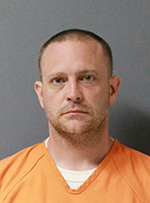 Court documents state Morgan was charged after a Steele County Sheriff’s Office deputy was traveling north on Interstate 35 before 3 a.m. Sunday when he when he saw a black Sedan traveling south at 107 mph.

The deputy reportedly activated his emergency lights, resulting in the vehicle slowing down and attempting to veer toward the shoulder of the road before accelerating and traveling 110 mph south on I-35, court documents state.

The vehicle reportedly took the Hartland and Geneva exit from I-35 and failed to stop for a stop sign, continuing to head west on 325th Street at 110 mph and traveling on the wrong side of the road.

Court documents state the vehicle continued south on 740th Avenue and crossed Interstate 90, coming to a stop north of the entrance to Freeborn County Fairgrounds. The driver of the vehicle was identified as Morgan, and there was reportedly a second person in the vehicle who was taken into custody. She has not been charged in connection with the alleged incident.

Morgan reportedly stated he fled from law enforcement because he had Department of Corrections warrants.