Funeral services for Marvin Brindel will be at 11 a.m. Tuesday at the St. Theodore Catholic Church in Albert Lea. The Rev. Kurt Ferrell will officiate. Visitation will take place one hour prior to the funeral service. Interment will be in Hillcrest Cemetery. 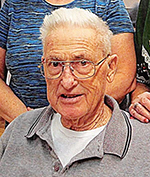 Marvin returned to Albert Lea after his service, where he remained a member of the community for the rest of his life. He was employed at Wilson & Co. for 43 years. He was a member of St. Theodore Catholic Church, and his faith was very important to him.

His hobbies were bowling, woodworking and doing many puzzles. He belonged to the American Legion, Eagles Club, and the Albert Lea Clown Club in the 1950s and ’60s. He liked Western music, books and a good game of cribbage.

He was united in marriage to Waunita Lunning on Aug.31, 1973, where he gained loving stepchildren.

He is preceded in death by his wife, Waunita; six sisters and five brothers;

In lieu of flowers, memorials are preferred to St. Theodore Catholic Church or Mayo Clinic Hospice in Albert Lea.