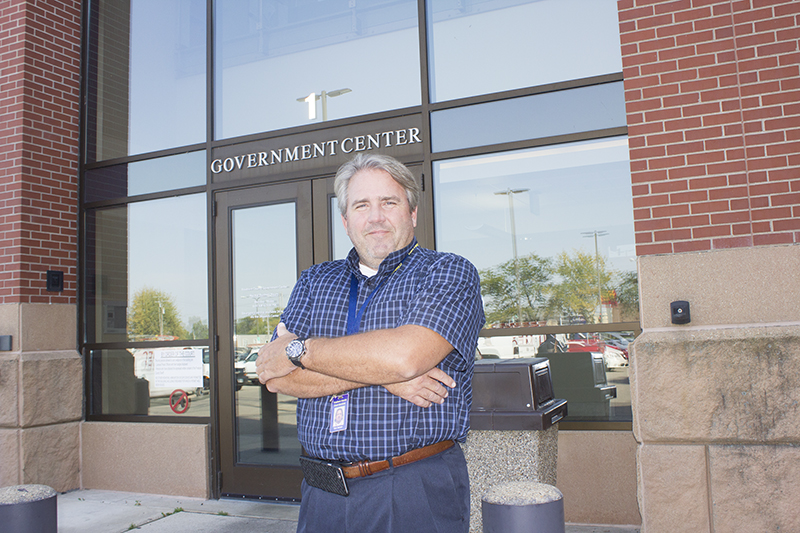 After two decades of helping convicted clients re-establish themselves, Tom Jensen is expected to take the reigns of Freeborn County next month. - Sam Wilmes/Albert Lea Tribune

The next Freeborn County administrator has spent the last two decades helping local residents re-establish themselves after criminal convictions.

Tom Jensen, 51, completed contract negotiations with Freeborn County Commissioner Jim Nelson on Tuesday to become the new county administrator. His employment contract will go before the Board of Commissioners next Tuesday.

A 1984 graduate of Albert Lea High School, Jensen graduated from Minnesota State University-Mankato in 1989 with a degree in corrections and a minor in law enforcement.

After working at correctional positions in other parts of the state, Jensen was hired in Freeborn County in 1997. He was promoted to his current position in 2000.

Jensen said he still does not fully comprehend the gravity of his promotion.

“It’s still very somewhat surreal, honestly,” he said. “It’s a little bit — it hasn’t sunk completely in that all of this is taking place. It sinks in every day when I’m running back and forth 300 times and wearing out my shoes, but it hasn’t sunk in to the point of I’ve really been chosen. I don’t think that will happen until probably Tuesday. It might not happen until the first of October, when I am in the chair, doing the first board meeting.”

Jensen called being selected from an original field of 29 candidates “humbling.”

“It truly is,” he said. “I’m very grateful for the commissioners to have the confidence in me to make that decision. And I am going to try. I am going to do the best I can.”

Jensen said he tries to be “extremely clear” in his thoughts, and he wants employees to have a clear understanding of situations. He hopes to address problems while letting successful parts of county operations remain untouched.

Freeborn County is being fiscally conservative, said Jensen, who added he hopes the public understands that “by and large, we are very lean.”

Jensen said his expectations are higher than some other leaders.

Jensen placed credit for the county’s success to its 14 department leaders.

“Those 14, that’s where the credit lands,” he said. “It’s not with administration. It’s with those 14 people and all their staff that every single day do the best they can. I know that; I’ve been here for 21 years. I’ve seen it every single day.”

Jensen recalled one of his own clients who has been sober for more than 15 years and still invites him to yearly sobriety ceremonies. He said he’ll miss his co-workers in the Court Services Department. He still plans to visit the department.

“You see what they do every day,” he said. “You see the effort they put in every day; you see the desire they have to help the folks they’re working with every day. So yeah, I’ll miss them.”