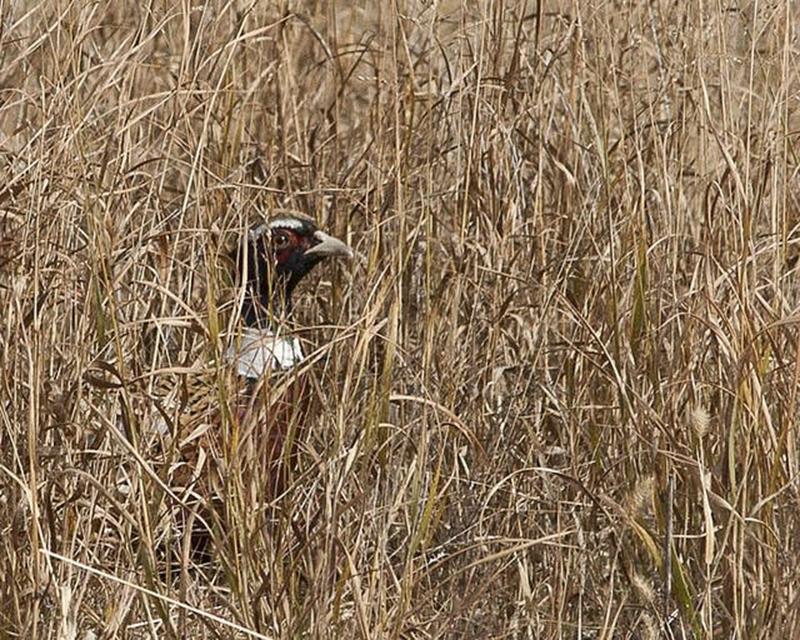 A pheasant hides in grass near the Coon Rapids dam. - Marlene Sternberger/MPR News

Minnesota’s pheasant population has fallen dramatically in the past year, the result of an ongoing decline in nesting areas as farmers pull land out of conservation programs and into crop production.

The state’s annual August roadside survey for pheasants found 38.1 birds per 100 miles of roads driven this year, down 26 percent compared to 2016, the Minnesota Department of Natural Resources reported Tuesday.

“Although it appeared mild winter weather and dry summer weather might boost our numbers, that wasn’t the case,” Nicole Davros, the DNR research scientist who oversees the annual August roadside survey, said in a statement. Davros attributed the drop to the “steady decline in undisturbed nesting cover since the mid-2000s.” The 2017 pheasant index is 32 percent below the 10-year average and 62 percent below the long-term average, the DNR said.

News of the drop comes about five weeks before the state’s 2017 pheasant opener Oct. 14. All the state’s regions showed declines in the pheasant index compared to last year except the south-central and southeast regions, which remained similar, the DNR said. The highest pheasant counts were in the west central, southwest, and south-central regions where observers reported 43 to 55 birds per 100 miles driven.

Although weather causes annual fluctuations in pheasant numbers, nesting habitat is more important for long-term trends in the state’s pheasant population. Since 2007, Minnesota has lost about 686,800 acres from the Conservation Reserve Program, a federal program that pays farmers to remove environmentally sensitive land from agricultural production and restore vegetation to improve water quality and wildlife habitat.

Because of that habitat loss, the pheasant index and pheasant kills during hunting season are down. When Minnesota’s Conservation Reserve Program acreage hit its high point of 1.83 million acres in 2007, Minnesota hunters saw the highest pheasant harvest in decades, the DNR added.

Warm winters usually lead to good hen survival and therefore more nests in the spring, but the 2017 hen index, at 5.8 hens per 100 miles, was also down 26 percent from last year.

“It’s surprising to see our hen index down this year,” Davros said. “We experienced a pretty mild winter so hen survival should have been good. But the amount of habitat on the landscape makes the difference in the long run, so we may be at the point that good weather just isn’t enough to help us anymore.”