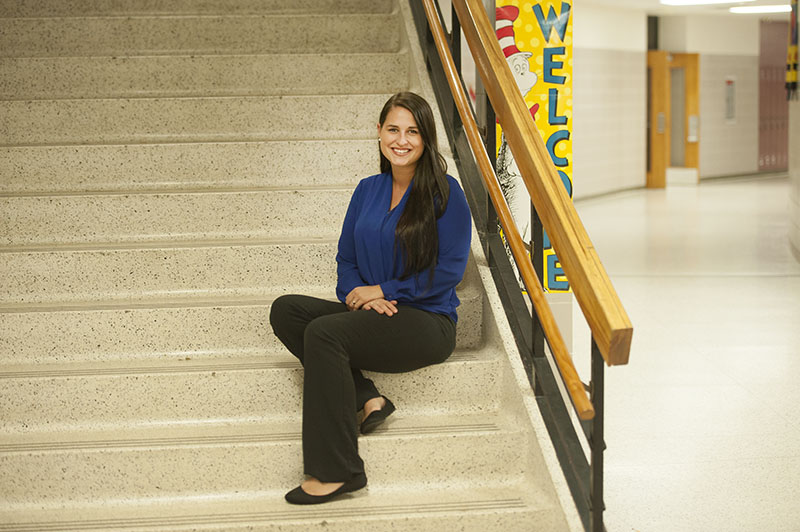 Brittany Voigt has been the public relations coordinator for the Albert Lea school district since 2015. She live in Wells with her husband, Jon, and their two children, Vinny and Audrey. Tyler Julson/Albert Lea Tribune

USC graduate grateful to use her degree in southern Minn.

Brittany Voigt, a lifetime resident of southern Minnesota, has worked as the public relations coordinator for Albert Lea Area Schools for two years.

Voigt said she counts herself lucky to be able to work and live in such a great area. As a graduate of United South Central in 2006, Voigt went on to the University of St. Thomas and obtained a degree in public relations and communications studies in 2009.

After graduating from college, she worked in the admissions office at St. Thomas and from there she moved on to work as a paraprofessional with the United South Central School District.

In the Albert Lea district, she takes photos at events, creates and uploads videos, manages the website and works with local media.

Voigt said she never expected to be able to use her degree here in rural southern Minnesota, but considers herself lucky to be able to raise her family here and be a part of such a great community.

“When I went to school, (public relations) wasn’t a very big field,” she said. “I always imagined myself working for a big business or corporation somewhere in the city.

“But I absolutely love this, it’s perfect. Looking back now I wouldn’t change a thing, to be able to do this is a dream.”

Her favorite part about being in southern Minnesota is being so close to her family. She described herself as a family-oriented person, and being able to raise her children around all of her relatives is important to her.

“People think that they miss out on opportunities because they aren’t living in the big city,” Voigt said. “But especially when raising kids here, you have more opportunity because now you have time to spend with them and grow up with a lot of their relatives.”

Voigt lives just outside the town of Wells with her husband, Jon, and their two children, Vinny and Audrey.

Voigt and her husband are also avid videographers. They record weddings, events and many other things for people. As a very social person, she said it’s a perfect outlet for her to expand her interpersonal communications. Aside from videography, she said her other hobbies are cooking and being around her family.

“I absolutely love working in Albert Lea,” she said. “The city is beautiful, and I really enjoy the community and the people I work with. I am grateful for this opportunity to make the short commute here for work.”