Sarah Stultz: Where were you during the Sept. 11 attacks? 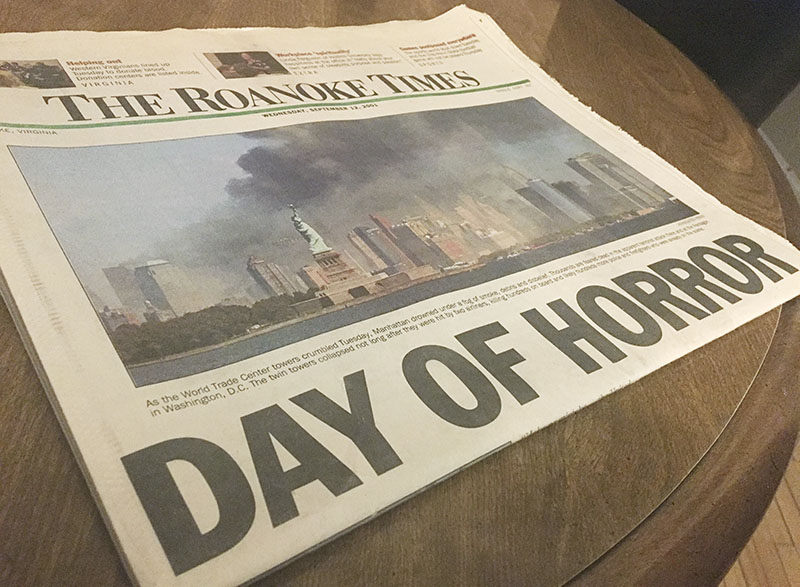 Nose for News, By Sarah Stultz

A teacher from next door knocked on our door, whispered something to my teacher and my teacher turned on the TV. A few minutes later, we watched as a plane flew into one of the World Trade Center towers. At that point, we didn’t know what was going on, but I remember how silent it got in the classroom. Another plane, I found out later, had crashed into the other tower less than 20 minutes before.

My memories after that are foggy, but I remember seeing images of people covered in soot, coming down the New York City streets.

I remember hearing that a third plane crashed into the Pentagon and a fourth crashed in Pennsylvania, though it had been on its way to Washington, D.C.

The situation became a little more real to me when I heard about the Pentagon, being that was about four hours away from my house at the time in southwestern Virginia.

Were there going to be more attacks?

At that point in my life, I can’t remember if I knew yet what I planned to do when I went to college, but I remember thinking that I had to keep the newspaper from that day.

Going through a couple boxes in my closet, I pulled that paper out again Sunday night, on the eve of the 16th anniversary of what we now refer to as 9/11 — a day that forever changed our country and officially launched the War on Terror. Seeing those photographs in the newspaper brought back a flood of emotions.

As Adm. Robert Natter, commander of the U.S. Atlantic Fleet, said in my hometown paper, The Roanoke Times, on Sept. 12, 2001, “We have been attacked like we haven’t since Pearl Harbor.”

We had learned in school about wars, such as World War I and World War II, but most of us had been blessed at that time to not know much about war firsthand. This was new territory for us, and the unknown was scary.

Each year as 9/11 comes around again, I think back to when I first found out about the attacks and how I felt that day. As a 17-year-old girl at the time, I don’t think I fully understood what was happening, but I knew it was serious.

Unfortunately, as time goes on, the details from that day are fading, but I do remember that roller coaster of emotions that I — and many others across the country — went through as we found out and came to terms with what happened.

Thank you to all of our current and former military members and first responders who step up each and every day to protect our communities and our nation.

We are forever indebted to you for your service.