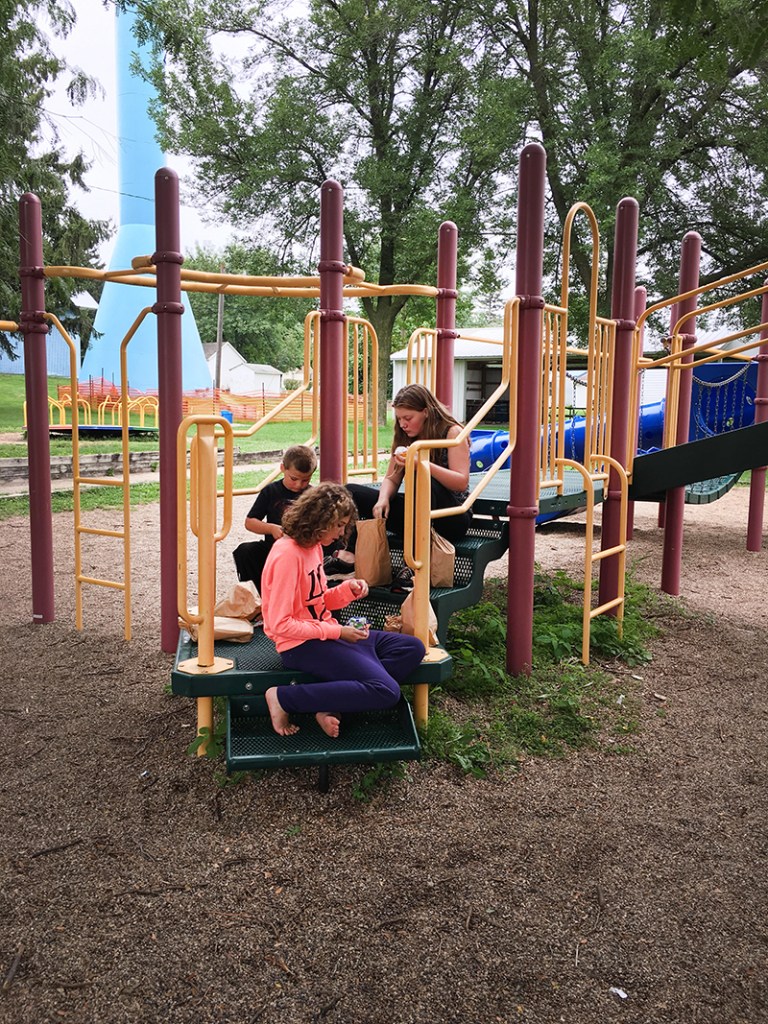 Children enjoying a sack lunch in Kiester City Park this summer thanks to the Summer Lunch on Wheels program. - Provided

When its first season wrapped up Sept. 1, the Summer Lunch On Wheels program had distributed a total of 8,626 sack lunches to children in area parks during its 13-week run, according to a press release.

That number astonished even the program’s organizers, the Wells Area Food Shelf, that began last fall dreaming up ways to help hungry children during the summer. That’s when a generous grant from an area business wishing to remain anonymous was given to the food shelf.

“We were grateful that our board of directors decided to set aside the grant specifically for a summer program for area kids,” said food shelf board president Jean Steinhauer of Wells. “We’d been giving families with school-age children extra food during the summer months for a number of years, but we felt we could somehow do more.”

And more they did, plotting and planning until children in a number of eastern Faribault County communities were included in the sack distribution.

“It was a big project,” Steinhauer said, “and there would have been no way we would have been able to accomplish what we did without our very exceptional volunteers. We figure about 120 people from our area took time from their summers to make SLOW run smoothly.”

Minnesota Lake’s 18 volunteers sacked a total of 1,304 and moved them to the park for distribution.

In Wells, a total of 4,048 sacks were made ready by about 56 volunteers. Then, volunteer drivers took them to both Thompson Park and Half Moon Park for children ready to have a snack.

Volunteers in the southern part of the county had the furthest distance to drive, but their dedication was appreciated, the release said — a total of 2,590 sacks were distributed in the parks in Bricelyn, Kiester and Walters after they were prepared in the former newspaper space in Kiester and then driven by volunteers to the parks. A total of 42 people helped that sacking and distribution effort.

There are currently a great number of summer food programs for children in Minnesota and the number is growing every year. What makes the SLOW program unique, according to the release, is that it offered food to hungry children who happen to live in small towns, like all of the SLOW towns.

Program organizers are already discussing ways the program might be improved, indicating it’s very possible SLOW will return next summer.